Kooikerhondje, A Happy Breed, Rare Outside of Europe 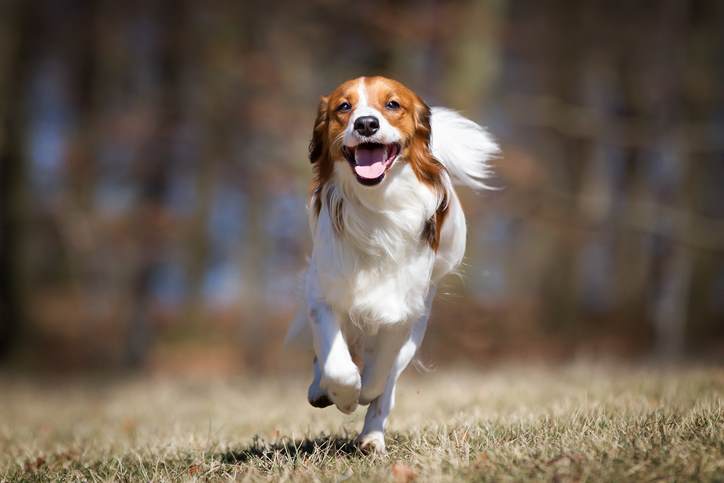 The Nederlandse Kooikerhondje (pronounced Koi-ker-hond-yuh) is a happy, intelligent and adaptable breed that was originally developed as a working dog to help duck hunters.  Even early in the breed’s history, people realized how suitable these dogs were for family life and they developed the reputation as also serving as a beloved family pet.

These dogs are always white and orange with a full thick tail and an expression that makes the dog look like they are smiling. Their tails are feathered with a thick white plumb.

They are playful and full of life yet always watchful and somewhat reserved with strangers.  Their sensitive nature makes it difficult for them to make friends with people, children or dogs immediately.

Once he has accepted someone, though, he is loyal for life.  They tend to be a one-person dog, but if socialized from early on to enjoy the company of a family with children, Kooikers can make excellent playmates for children.

They are self-confident, good-natured and always alert.  Though sensitive to loud noises and sudden movements, they are not aggressive and are not considered to be a noisy breed.

Their sensitive nature may make them more vulnerable to a harsh correction.  They respond best to positive methods and praise. They have a strong prey drive which also means they enjoy retrieving games and they also love swimming.

They are an active breed and need enough stimulation, both physical and mental to keep them happy.  Daily exercise is necessary as well as plenty of human interaction.  They are highly intelligent, eager to please, and easily trained, yet prolonged repetitive methods will not work with these dogs.

They do well in dog sports such as Obedience, Flyball, Agility, even Dock Diving.

Country of Origin: The Netherlands

Good with Children:  Yes, if raised and socialized properly

Good with other dogs:  Yes, if raised and socialized properly, Not good with small pocket size pets such as gerbils and hamsters. 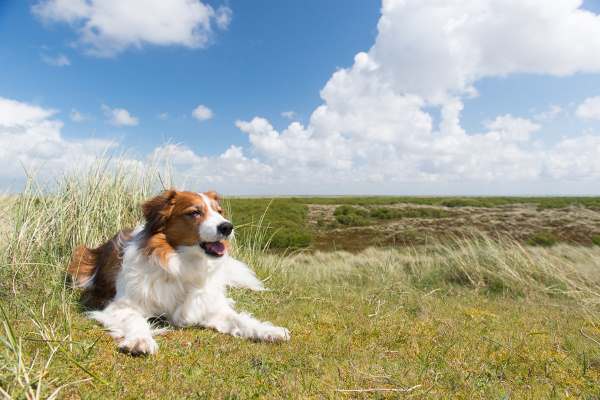 History of the Nederlandse Kooikerhondje

The Kooikerhondje has a long history dating back to the 1500 and 1600s when Dutch hunters used them to lure ducks into traps, a method of hunting called tolling.

Their name comes from the type of work they did.  The duck hunters were called Kooiker and hondjes’ means dog.  So, the name, Kooiker’s hondjes literally refers to Kooiker’s dogs.  It was later shortened to Kooikerhondje.

During the “off” season, they would search out and destroy vermin such as rats, mice and moles.  When not working, they were considered a much-loved pet.

The Dutch nobility also loved this breed and you can find these dogs included in paintings by Dutch masters.

However, the reemergence of the breed can be attributed to Baroness Van Hardenbroek Ammerstol.  She searched the countryside for these spaniel type dogs and when one was found and mated with one of her own dogs. Tommie, the founding bitch was mated with Bobbie and they produced a litter.

She began this breeding program during 1942 and 1943, a period when Nazi Germany occupied the Netherlands.

Eventually others became interested in the breed and continued breeding over the years.  On December 20, 1971, the breed received recognition by the Dutch Kennel Club and the stud books were closed.  By then, there was enough gene pool to sustain the breed.

Today, they are still very rare but are now beginning to gain recognition throughout North America. Though not recognized in Canada yet, they have been part of the American Kennel Club, FSS program in 2004. 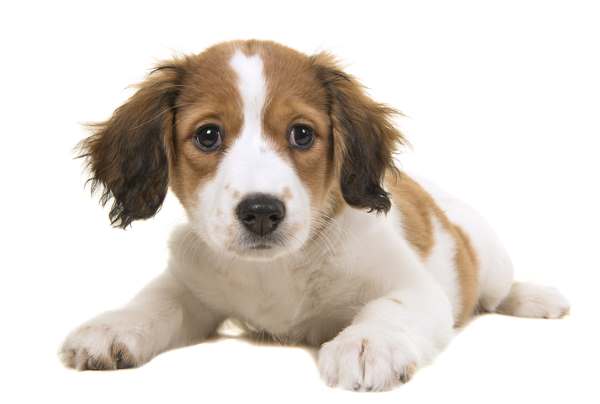 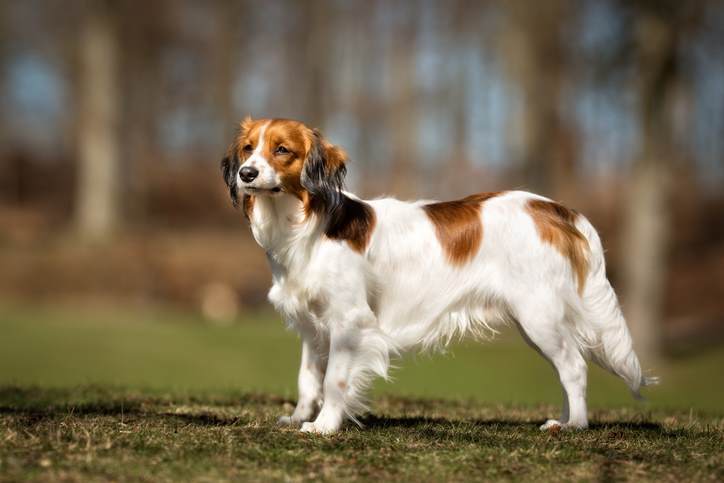 The Kooikerhondje is a friendly, even-tempered dog who is eager to please.  They are self-confident, and alert making them a good watchdog.  Originally bred to lure ducks into enclosures and kill vermin they have a strong prey drive which might make them unsuitable for owners who also have small pocket pets.

They are active, enjoy playing, retrieving and even swimming, but are equally happy to lie on a comfortable couch near their owners. Puppies and young adults will need more opportunities for physical exercise and mental activities to keep them happy.  Without adequate socialization, training, and exercise, a Kooiker may find other ways to pass the time, most of which are not those desired by their owners.

They are adaptable and will fit in with many different lifestyles.  They want to be part of the action and won’t do well if left alone for long periods of time.

If they have plenty of opportunities to exercise, they do very well in apartments.  The breed does tend to do best when they don’t have to share their home with other dogs, though most will accept the presence of other canines if socialized with them.

If socialized from puppyhood, they can make great companions for respectful children.  Since they don’t tolerate loud noises or sudden movements, children should be taught how to interact appropriately with these dogs.

Some Kooikers are cautious and reserved around strangers, but never mean.  Early and ongoing socialization is needed if you want your Kooiker to not only accept but enthusiastically welcome all of your visitors.

These dogs are easy to groom by brushing about once per week.  Bathing is recommended when dirty or smelly.  Frequent bathing is not recommended as it robs the coat of the natural waterproof properties.

Ears should be checked and cleaned as needed.  Other than clipping the nails when long and brushing the teeth, grooming these dogs is very easy. 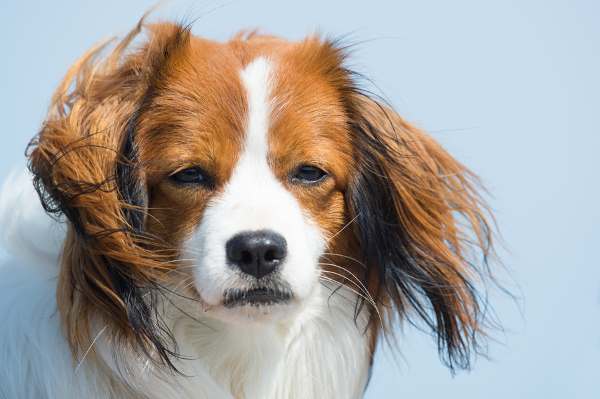 This breed is relatively healthy and national breed clubs have been very diligent to encourage breeders to do genetic testing and health screens prior to using a dog for breeding.  All dogs, however are prone to some disorders, many of which cannot be eliminated.  Here is a list of issues that have been identified in the breed.

VWD is a hereditary clotting disorder caused by a deficiency of a blood clotting protein, called von Willebrand Factor, that is required for platelet formation.  This problem causes abnormal and excessive bleeding which can be a major problem during surgeries or accidents.

In patellar luxation, the kneecap pops out of place causing lameness.  It is a hereditary defect but can also be caused by over-exercise or malnutrition.  It is relatively common in small breed dogs.

This condition occurs when the bones of the hip joint are not formed properly.  The joint does not rotate properly causing pain and lameness from mild to crippling.  Although it is an inherited defect, environmental facts such as obesity, over-exertion, or an improper diet play a part.

Other diseases that have been identified include Epilepsy, Kidney Disease, Polymyositis and eye problems.