Compulsive Disorder in Dogs:  Train Your Dog Not to Harm Himself

Compulsive Disorder in Dogs:  Teach Your Dog Not to Harm Himself
by Sharon Vaughn     |Published 08-24-2020

They say that dog owners are the happiest people in the world. Dogs cheer you up on your lonely days, and they are undoubtedly the best loyal friends you can have.

But what happens when dogs actually start harming themselves due to any unknown reasons? That must be the most worrisome thing that you may come across as a dog-owner. 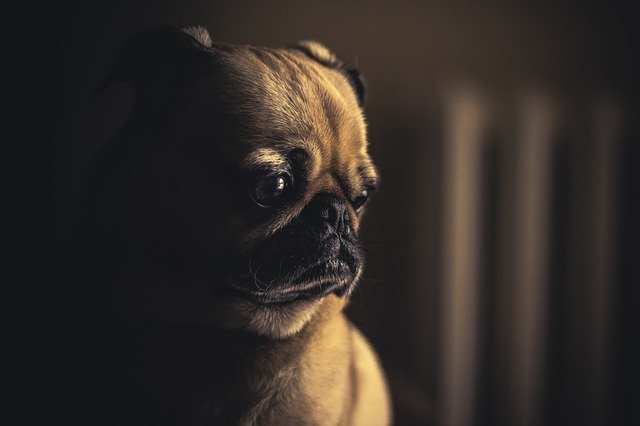 Compulsive Disorder in Dogs can be very serious and needs to be addressed.

Mental disorder and illness is a stigma in our world. We are living in a surrounding where 1 out of 5 dogs suffer from such illness. Yes, just like humans, dogs do have to struggle through mental disorders and helplessness.

As a dog owner, you should be aware of all the triggering moments for your dogs. Actual monitoring of each movement of your dog can help you to come to a conclusion.

How to Train Your Dog to Interrupt Self Harm?

Here’s an article that’ll help you in understanding the reasons behind your dog’s self-harming behavior and how to train him from refraining from doing the same.

Why do dogs cause self-harm?

You would have come across many people, offline and online, who’d suggest you some half-known remedies to train your dog to interrupt self-harm. But they fail to explain the reasons behind such activities and do not get to the root cause of this problem.

There can be several reasons which lead to dogs causing self-harm. The most common being some sort of mental illness and even past trauma. Another reason for this behavior can be allergies as well. People tend to think of dogs as furry animals who love to play catch and are just goofy beings.

But it is not the case every time. Some dogs do suffer from mental illness just as humans, and they do tend to perform self-harming activities as coping mechanism techniques. For example, the constant licking is known to be a symptom of OCD (obsessive-compulsive disorder) or compulsive disorder in dogs.

What are the most common mental illnesses in dogs?

For years, the stigma surrounding mental illness and mental health has been prevalent. But now, people and especially dog-owners have started accepting the fact that dogs, too, are vulnerable to mental illness just like humans.

They also face problems of anxiety and separation. This may also lead to a lot of questions for them, and it is essential to pay heed to their issues for them to engage in a healthy lifestyle and a long life.

As mentioned above, the two major reasons for self-harm or self-mutilation in dogs are medical and psychological issues. If your dog’s problem is of some medical condition, it’ll eventually be resolved after his medical conditions are appropriately treated.

For this, you need to take your pet to a good veterinarian doctor. He’ll have to perform a physical examination of your dog and conduct tests for skin scraping, any fungal or bacterial infections.

When it comes to psychological or mental illness, even dogs suffer from certain anxiety and compulsive disorders, which may be caused by past trauma, such as bad treatment from their previous owner. Other conditions, such as social anxiety, separation anxiety, and depression, are common even for dogs. 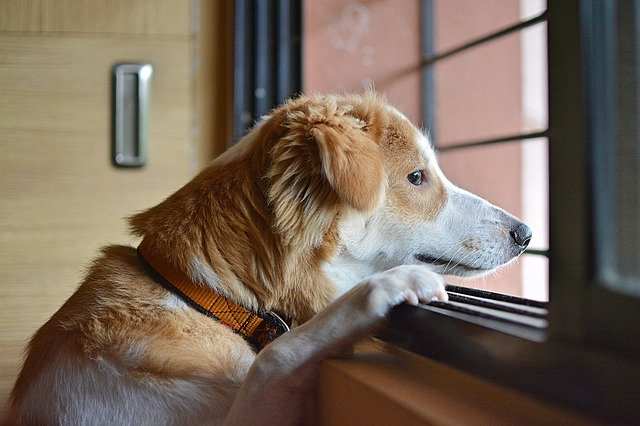 Separation anxiety is the fear and panic caused by the suspicion that their owners will leave them. Destructive behavior in the house is often the result.  Social anxiety is developed in dogs due to previous instances of neglect.

They show symptoms of trembling and extreme anxiety when around other humans or dogs. Another common mental illness is noise anxiety, which leads to a change in their behavior when there are fireworks outside or even during thunderstorms. 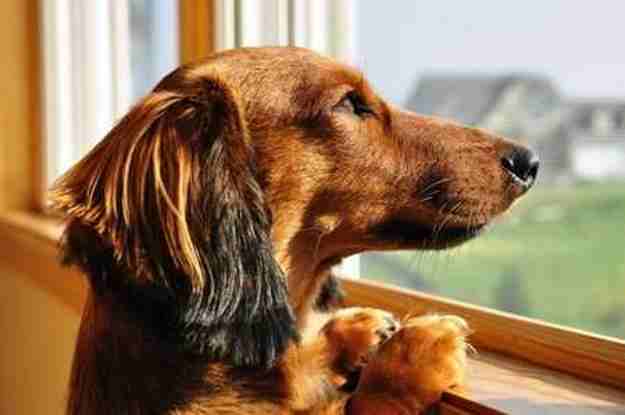 Dogs can get depression too.

Depression, amongst other illnesses, is also seen in dogs. A dog-owner looks for sure signs and symptoms that show traits of dog depression, such as being very lethargic, feelings of extreme sadness, and withdrawal. These mental illnesses can be strong causes of self-harming behaviors seen in your dog.

Symptoms of Mental Illness in Dogs

Dogs who suffer from mental illnesses do show a lot of symptoms such as trembling, hiding somewhere, loss of appetite, self-injury, repetitive behavior, weight loss, diarrhea or vomiting, attempting to escape, and becoming less playful.

Such symptoms are the key factors in determining the problems and diagnosis of any illness or even infections. It is best to leave the diagnosis for your pet’s veterinarian doctor but also essential to pay attention to any such symptoms and any drastic changes in your dog’s behavior. 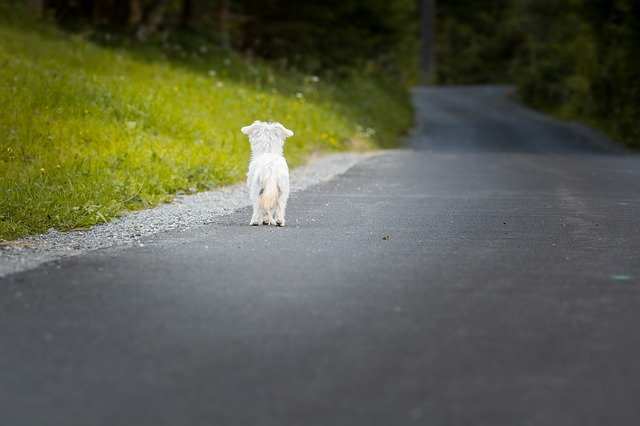 Running away is just one symptom of mental illness in dogs

What are the signs of self-harm in dogs?

You need to be alarmed if your dog obsessively licks its tail and genitals if there are an excessive hair loss and any sorts of sores or rashes.

Some behaviors such as tail-biting, flank-sucking, and acral lick are considered as compulsions and obsessions. In medical terms, these are known as obsessive-compulsive disorders (OCD).

It is best to look out for what triggers such behaviors in your dog to correctly identify the problem. When your dog continuously chases its tail and catches it, he may bite it in such a manner that he seriously self injures itself.

When this happens, your vet may have to partially or wholly amputate your dog’s tail. This may not seem detrimental, but sometimes such self-harm injuries can be dangerous and also life-threatening.

It would help if you also look out for allergies that may cause problems, such as some food items or fleas. Such allergies can also lead to acral licking, which is a disorder that causes ulceration and infection of the dog’s skin.

Some dogs are hyperactive and bark continuously, which may not seem very alarming. Still, nonetheless, you as a pet-owner should carefully look into the matter every now and then just to be confident that your dog is healthy and perfectly fine.

Self-mutilation can cause severe injuries to your dog’s skin and even deeper tissues. It should not be taken lightly because when your dog tries to harm itself, there must be some psychological aspects that may disrupt your dog’s peace and overt bodily responses.

How to train your dog to interrupt self-harm?

It is not easy to train your dog from self-harming, especially if it is suffering from mental or psychological illnesses. Many conventional ways of training your dog come from force and punishment, which may have worked in the past but is not the best way to teach them.

These conventional techniques only focused on making your dog obedient and did not quite understand or identify the actual problem underlying their self-harming behaviors. As a dog owner, it is justified to be concerned about your dogs, and so here are some ways you can train your dog so that they do not engage themselves in self-harm.

The first and foremost thing to do is to try and reduce or alleviate stress from your dog’s life. For this, you need to identify the “stressors” or stress-causing behaviors.

Deal with Separation Anxiety if present

To deal with their issues regarding separation anxiety, try spending more time with your dog, and minimize the time when your dog stays alone. You can also engage in more playing-oriented activities, which will help your dog to be more trusting.

Make sure you do this frequently as it takes time for dogs to start trusting their owners, especially the ones who have faced past trauma due to neglect and separation from the previous owner.

Specific bandages and Elizabethan collars can also help in restraining your dogs from self-harming behaviors such as licking, scratching, and biting their own tail or genitals. Elizabethan collars are shaped like a cone that is worn around the dog’s neck. However, it is only useful for short terms because such collars become irritable and frustrating for dogs, so they are best avoided after a short time.

Check for Price and Availability

Check for Price and Availability

Medication may reduce the symptoms of compulsive disorder in dogs

There are certain medications available that can also effectively reduce obsessive self-harming behaviors. But before buying these medications, it is crucial to ask your veterinarian.  Your vet is an expert, and you need to place your trust in them to diagnose or advise you in helping your dog correctly.

Seek professional advice when dealing with compulsive disorder in dogs

Self-mutilation or self-harm are behaviors to be concerned about, so as soon as you notice your dog performing such acts, take him to your vet and explain your dog’s actions and symptoms.

Your vet will perform a few tests that will give you an idea about what your dog is suffering from and how to resolve it. With proper medications, you can help your pup to maintain a good lifestyle and restore his happiness.

A dog is a man’s best friend. Sometimes, as dog-owners, you should become your dog’s best friend and help them with their unspoken troubles. They feel as we feel, they can feel pain as we do, and they too suffer from mental and psychological illnesses just as we do.

The only difference is that they cannot speak out about their issues and so you need to pay attention if you notice something off in their behavior for a prolonged time.

I hope this article would have helped you better understand your dog’s psychological and medical conditions, if any. 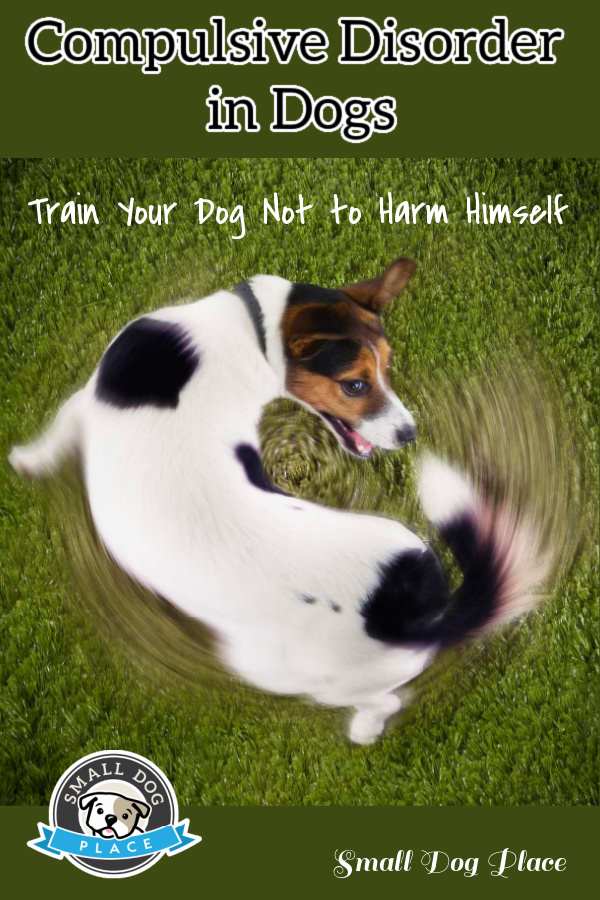 Sharon Vaughn is a Professionally Content Writer. Sharon has expertise in content writing for Animal Care, Dog and Cat Tips, Photography, Technology, and other new kinds of stuff. She has received multiple awards for her writing skills and magical words.

Did You Find, "Compulsive Disorder in Dogs," Helpful?