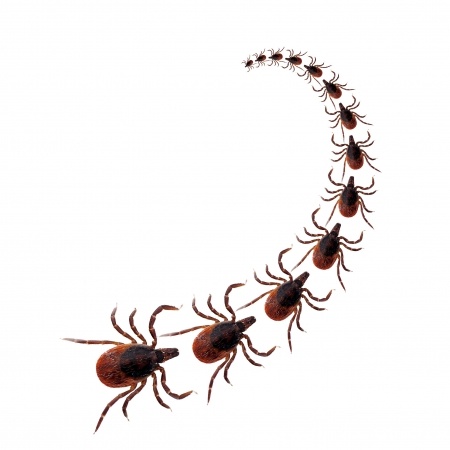 Lyme disease in dogs is one of those devious health problems that can affect your dog, not to mention other species as well as Humans.

It is caused by a bacterium (Borrelia burgdorferi) carried by an infected tick, the black-legged tick, Ixodes scapularis, which is also known as the small deer tick.

The disease is most common in the northeastern U.S. and northern mid-west.

Named after a town in Connecticut, It was not even recognized in humans until 1975 but since then, scientists have found that it also occurs in horses, cattle, and cats.

Many species of birds and wildlife especially mice, harbor the disease without showing outward signs and serve as the reservoirs for the tick infections.   Incidence of the disease increased in the 1980s and is now one of the most common tick-borne diseases in humans and dogs.

The CDC offers a map to help pinpoint where the majority of cases have been reported, but your local veterinarian is also a good source of information.

According to the CDC, the majority of cases (96%) of Lyme disease were reported from 13 states:

The largest number of cases in the U.S. occur in the New England States (Connecticut, Maine, Massachusetts, Vermont, New Hampshire) with the states of New York, New Jersey, Pennsylvania, and Delaware following second.

Even though Lyme disease is found most commonly in the stated listed above, there have been reports of the disease in other places as well.

The good news about this disease is that the tick must attach itself to you or your dog for at least 48 hours to transmit the disease, so frequent checks can reduce the risk of transmission.

Complicating matters more, not all dogs who are bitten by infected ticks will get sick and not all ticks harbor the disease.  The bad news is that clinical signs may not show up for several months if at all making a diagnosis more difficult.

If symptoms do appear they usually include fever, painful joints, loss of appetite and lethargy.  All dogs are equally susceptible to the disease, but those that spend more time outdoors in affected areas are most at risk.

In locations where the deer tick is most abundant, one must be most careful during the period between April and September when ticks are most likely to bite.

The disease is usually transmitted by juvenile or nymph ticks in the spring and summer and by adult ticks in the autumn.  The juvenile varieties are very tiny, usually the size of a pinhead.

Symptoms of Lyme Disease in Dogs

In the dog, the most common symptoms include swollen, hot painful joints.  They may have a fever and act lethargic.

Some also become so depressed that they are reluctant to move around.  Loss of appetite can also occur if the dog is not feeling well.

But, the CDC points out that 95% of dogs that have been exposed to Lyme disease  do not show any symptoms.

The one symptom that is NOT present in the dog is the telltale rash at the infected site that shows up in humans who have developed the disease.

More serious complications can occur such as kidney damage, or heart disease or even neurological disorders.

Kidney problems seem to be more common in larger breed dogs.  Sometimes these symptoms do not show up for 2 to 5 months after the tick exposure.

Dogs most at risk are those that:

How it is Diagnosed

If you think your dog may be suffering from any of the symptoms listed above, it’s a very good idea to make an appointment with your vet to get your dog checked out.

This is not the easiest disease for veterinarians to diagnose because the symptoms often mimic other diseases such as arthritis which also causes lameness and pain in dogs.

You cannot go by the assumption that it could be Lyme if you found a tick on your dog.

Not all dog ticks carry the disease and for the average person, differentiating between the common dog tick and the species of tick that causes the disease is nearly impossible.

When making a diagnosis, the veterinarian usually looks at four factors:

There are several commercially available blood tests that can be used, some of which your veterinarian may have right there in the hospital.  One such test, called SNAP, looks at the dog’s exposure to Lyme while also checking for the presence of heartworms.

Unfortunately the results cannot tell you whether the presence of the Lyme bacterium is causing the problem in your dog. There are other tests that your vet may choose to do.

Your vet may also run other blood tests to determine the overall health of your pet and may even do a urinalysis if kidney problems are suspected.

Treatment for Lyme Disease in Dogs

Treatment for joint pain and antibiotics are often prescribed to treat Lyme disease and the course of treatment can last as long as 30 days.

Tetracycline, doxycycline, and penicillin-like antibiotics, such as amoxicillin and ceftriaxone are often prescribed.

Luckily, these antibiotics are relatively inexpensive and have few side effects.  Anti-inflammatory and corticosteroids are often given for pain.

Sadly, relapses of the disease have been known to happen but even when this does occur, the dog can be treated and usually does well.

Prevention of Lyme Disease in Dogs

The good news about Lyme disease in dogs is that it is easily preventable. Limiting exposure in tick infested areas can help but is not practical nor would you want to if you are a nature lover.

If you live in one of the states listed above, you will want to take extra precautions such as assuring that your yard is mowed regularly, fencing in an area for the dogs where no deer can roam, and preventing your dog from wandering through tall grasses and other long vegetation.

Tick Control
as a way to prevent Lyme disease in dogs

First, you must learn if you are in an area where you and your dog are likely to encounter the culprit tick.  If you are, then the best way to prevent the disease is to prevent ticks from biting and attaching to your dog’s skin.

You can use a spot on product and/or check for ticks daily. Dips and collars can also be effective in controlling ticks and thereby preventing Lyme disease in dogs. 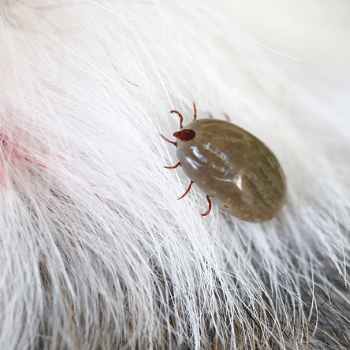 Use a spot on or spray for fleas and ticks on your dog.

Products such as the Preventic® collar, Advantix®, Frontline® and Revolution® all kill the tick or cause it to drop off in time to prevent transmission of the disease.

You can use a human insect repellent on yourself but you should not use it on your dog, especially those with DEET as the dog may ingest some of it if he licks himself and it would be toxic.

If you prefer to check your dog daily for ticks, there are several ways you can do it.

A good routine to get into is a daily brush or combing.  A once over pet massage will be appreciated by your dog and you will be able to feel anything unusual on his/her skin.

Another way is to go through the dog’s coat with a blow dryer. If your dog is not stressed by a hair dryer, a once over will reveal small black spots (a.k.a. ticks) easier than if you go manually.

Ticks like to hide near the dog’s ears, head, neck, belly and feet, but don’t miss any other areas.  Once found, you must remove the tick with a pair of tweezers.

Merial Frontline Plus Flea and Tick Control for 5-22 Pound Dogs and Puppies, 3-Pack

How to Remove Ticks from a Dog

If you do not feel comfortable doing this yourself, make an appointment with your vet.

Vaccinations for Lyme Disease in Dogs 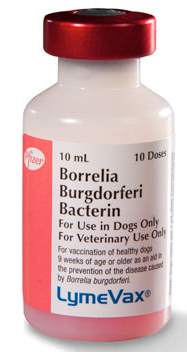 There is a vaccine available that can help prevent the disease.  Usually the initial and booster vaccine is given and then the dog is revaccinated on a yearly basis.

This is considered a non-core vaccine and is not routinely given.  The vaccination is only recommended if you live or travel with your dog where the risk of Lyme disease is high.

If you camp or hunt regularly, especially in areas known to have a high incidence of Lyme disease, be sure to advise your veterinarian.

There is debate about whether the vaccine is worth giving.  Most cases of Lyme disease in dogs do not follow the same path as that found in humans.  In fact, it is estimated that as many as 90% of dogs infected will never get sick and those that do can be easily treated.

It has also been suggested that vaccinating a dog with the Lyme organism might be just as harmful as getting the infection from a tick!  Of course there are always two sides to the story…

Those that favor the vaccine make the argument that just because the disease is not life threatening does not mean we should not prevent it.

Further, if our beloved dog becomes infected with the Lyme bacterium, does that then make him a reservoir of the disease to be passed to humans?

Through diligence, most cases of Lyme disease in dogs can be prevented.  If ever in doubt, always consult your veterinarian.

Remember this is a problem that affects both dogs and humans, so while you are protecting your loved fur baby, don’t forget to take measures to protect yourself.