But, are Scottish Terriers the best breed for you?

You might hear the Scottish terrier referred to as the Scottie or just plain Scot because that is the location of the origin of this breed.

They sport a beautiful terrier coat that consists of a hard, wiry, and weather resistant outer coat and a soft inner coat. 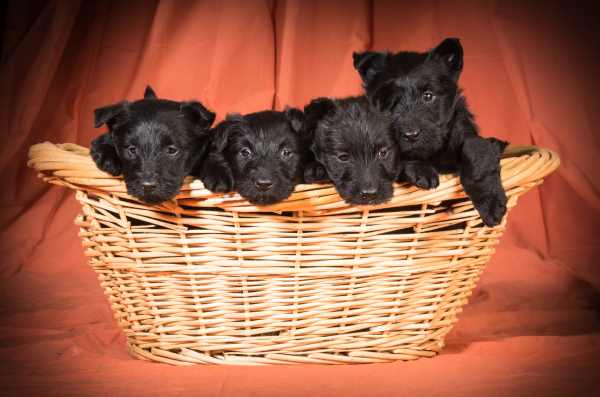 The classic look of a well-groomed  Scottie includes a distinctive beard, long eyebrows, longer hair on his legs and lower body and an upper body that is short.

These dogs are strong, fast, and alert, yet gentle and loving.  Bred and trained originally to hunt and kill vermin, they are now usually house pets.  While not considered high maintenance dogs, they do require regular grooming.  Their coat needs frequent brushing and clipping to maintain the classic look.

Basic obedience training is necessary for this terrier dog breed, and should begin as soon as the puppy arrives in your home.

These dogs are quick, have a strong prey instinct, and have that classic terrier spirit in them, Your puppy’s behaviors may seem cute now, but not as desirable, once a dog reaches adulthood.  Early socialization is also a must for Scotties

These dogs excel in a variety of canine sports including agility, flyball, earth dog  rally obedience and conformation should you decide to purchase a potential show puppy.

Quick Facts About the Scottish Terrier 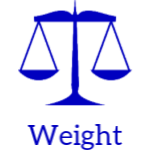 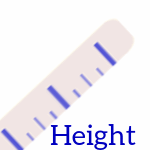 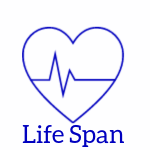 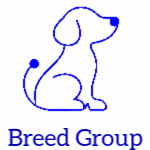 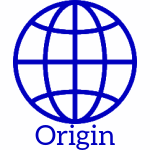 Good with other pets: At their best as “only” children, however…

If raised together, they usually do fine with other dogs; beware of small pets such as hamsters, gerbils or mice as the Scottie has a very strong prey drive and may mistake a household pet for prey. 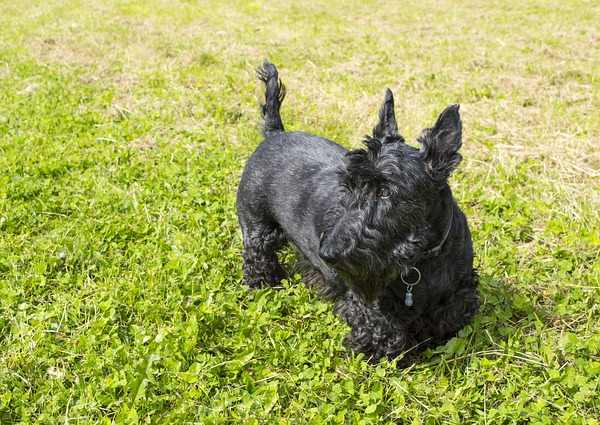 The Scottish terrier traces his history back to the highlands of Scotland.  Many believe that is breed is the oldest originating in Scotland and possibly one of the original terrier breeds and may have been around even during Roman times.

Called Skye Terriers at the time, they were bred and kept by hunters and farmers to find and kill vermin.

Four other Scottish terrier breeds include the Skye, West Highland white terrier, the Cairn terrier and the Dandie Dinmont Terrier was grouped together with the Scottish terrier.

Breeding decisions were made solely for a dog’s ability to do the job needed, and little attention was given to appearance.  In this case, the Scottish needed a dog that was sturdy, fearless, and able to tolerate the harsh Scottish climate.

The years between the two great wars saw the greatest increase in popularity and their popular has waxed and waned over the years.  In 2013, AKC ranked them at number 55 in popularity in the United States. In 2021, they ranked 58 with the AKC. 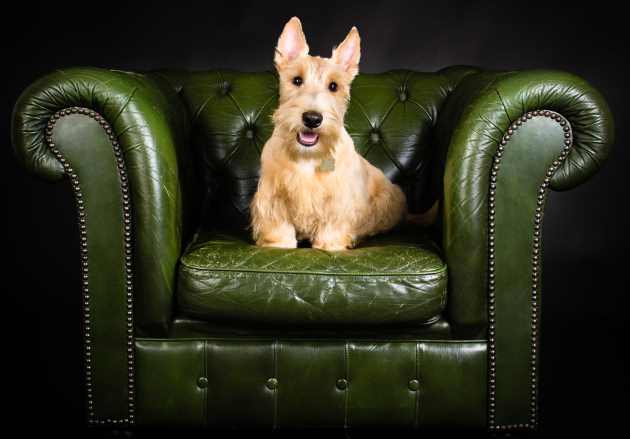 Although they may first seem somewhat aloof, their devotion to their special people or person is the best.  Scottish Terriers are very quick, alert and even feisty.  Known to be independent and intelligent, they have an abundance of self-confidence and determination, all characteristic traits that most members of the terrier group share.

They have a stubborn streak, so training should start early and continue throughout the lifespan.  A gentle, positive approach to training is most effective.  Early socialization is also important to prevent the dog from dominating the entire household and becoming wary of strangers.  They love to dig, getting this trait early on in their history because they were trained to hunt and fight badgers.

Chasing is another trait still very visible in the modern Scottish terrier and no squirrel, rat, or field mouse is safe when a Scottie is near.  They are at their best with a daily dose of exercise and play.

Playful as puppies and dignified as adults, the Scottie makes a great watchdog.  While not considered a big barker, they will alert you to someone at the front door. 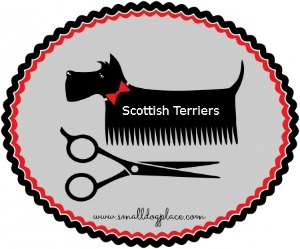 Scottish Terriers need regular brushing and combings especially during the time that the dog is shedding.  Shedding is not a major problem in this breed, and they are considered to be light shedders. Their hair does tend to tangle so a once over twice a week is necessary.

As with any double coated breed, brushing should be done in such a way that it goes down to the skin.  A light brushing of the top coat is not enough to prevent mats from forming.

Scotties require professional grooming is needed to maintain that classic Scottish terrier look.  Hand stripping twice a year to keep the coat in its best condition is also needed.

Other than that, basic grooming tasks include keeping the nails trimmed, brushing the teeth, cleaning around the eyes and face, and a good bath about every 3 or 4 weeks.  Their weather resistant coat usually resists dirt, but if not, a good brushing will get most dirt out of the coat.

As with all small breed dogs, Scottish Terriers are relatively healthy. All dogs, big or small are susceptible to infections, worms, and injuries.  The list of diseases below are not meant to scare you.  They are all genetic or thought to be of genetic origin and have been reported in the breed.

Scottie Cramp considered the most widespread hereditary problem affecting Scottish terriers is not serious, and dogs can live a long healthy life, often without treatment.  This condition causes the dog’s gait to change because of stress such as when the dog is hunting, fighting, or mating.  Some dogs cannot run or walk for a brief time and then the symptoms simply disappear.

The cause appears to be either a buildup or a depletion of chemicals in the brain making the dog uncoordinated.  It is present at birth and is permanent, but does not seem to worsen with age.  Treatment is usually not necessary, but if the dog’s condition is severe, a veterinarian may prescribe Vitamin E, Diazepam, or Prozac.

Von Willebrand's Disease (VWD) is common in small breed dogs and can occur in humans, pigs, and rabbits.  It is a genetic bleeding disorder, less severe than hemophilia and is passed to offspring by way of an autosomal trait (inherited by either male or female puppies.

The normal symptoms include excessive bleeding when the nails are cut into the quick, bleeding from the nose, gums, vagina, or penis, blood in the stool or urine and even internal bleeding.  Sometimes hematomas form on the body; the dog experiences bloody infected ears, and during surgical procedures, more bleeding is likely to occur.

Cushing's syndrome is another common problem in small breed dogs and also occurs in Scottish Terriers.  It consists of a group of symptoms caused by excessive production of cortisol.  Cushing’s syndrome can be caused by (a) a pituitary tumor, adrenal gland tumor, or from overuse of corticosteroids.

Hypothyroidism occurs when the thyroid does not produce enough hormones.  The symptoms in a dog include poor coat, chronic skin allergies and infections, weight gain, infertility, fatigue and intolerance of the cold.  Treatment usually consists of a daily pill.

However, when there are recurrent seizures that are not associated with a specific disease it is considered to be Classic or idiopathic epilepsy.

Before treatment can begin, the veterinarian must determine the cause and rule out other disorders that may be causing the Scottish Terrier to seize.

Treatment is needed when the dog begins to have more frequent or prolonged seizures than previously, and may involve the administration of phenobarbital, Dilantin, or primidone.

The Scottish terrier does best on a diet of high quality food based on his age and lifestyle.  Since some Scotties are more active than others, it's important to give just the right number of calories to assure that your Scottie does not gain weight. An average adult of 20 pounds will need about 587 calories.  You can determine how much that works out in cups by looking at the food label, but for most foods, it works out to be about 1 to 1 1/2 cups per day spread over two meals.

Chronic allergy problems that result in flaky itchy skin plague some members of this breed.  Sometimes these problems stem from food allergies.  The most common types of food allergies in dogs are beef, chicken, lamb, pork, rabbit or fish.  Wheat, soy, dairy and egg allergies are also common. Choosing a food that contains one protein source may help as well as avoiding foods containing wheat or soy. 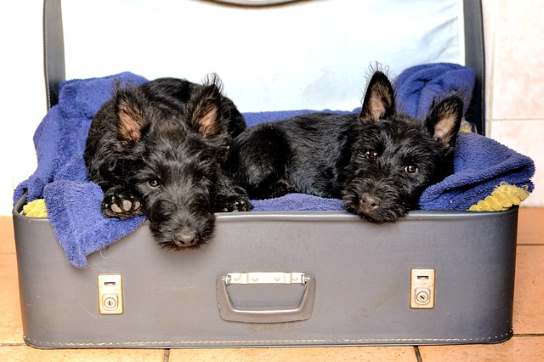 Traditionally considered a working breed, Scotties do well as a family companion.  They like children but are not always patient around young babies and toddlers.  Singles, couples, families and seniors find them to be great companions, but they are independent, so they do best with people willing to understand and tolerate all of their idiosyncrasies.

Though originally bred to be a farm dog, most no longer live on the farm.  They do well in apartments as long as they get enough exercise.  If living in a home, it is very important that they have a fenced in yard to run and play.  They have a very strong prey drive and won't think twice about leaving their property if there is a squirrel to chase.

This breed is active and needs plenty of exercise to keep them happy.  Since they are an independent breed with a work ethic, they do best when they have a job to do.  But routine training commands may not be the best job because they also tend to get bored especially with repetition.

A daily walk is very important but they don't jog very willingly so if this is your passion, a Scottie is not for you.  Their shorter legs make running difficult for them.

A Scottish terrier is first and foremost a true terrier which means he has a mind of his own and likes his independence.  That's not to say he prefers to be alone, but thrives on the company of his family.

The breed does very well with early socialization, especially towards getting along with strangers and other dogs.  Without any socialization to people, he can become very wary of strangers which can mean aggression.

Training takes time and the use of positive reinforcements, patience and a friendly attitude will be necessary to prove to your Scottie that it is in his best interest to listen to you.  They don't always do well in obedience, but that is not always the case.

Earthdog trials and agility are more his speed.  Still, his independent nature makes it hard for them to take direction from you.  That is just the way they were originally created -- to work on their own.  Still, they are very loyal and devoted to their owners.

Pros and Cons of Scottish Terriers

Did You Know...
Scottish Terriers 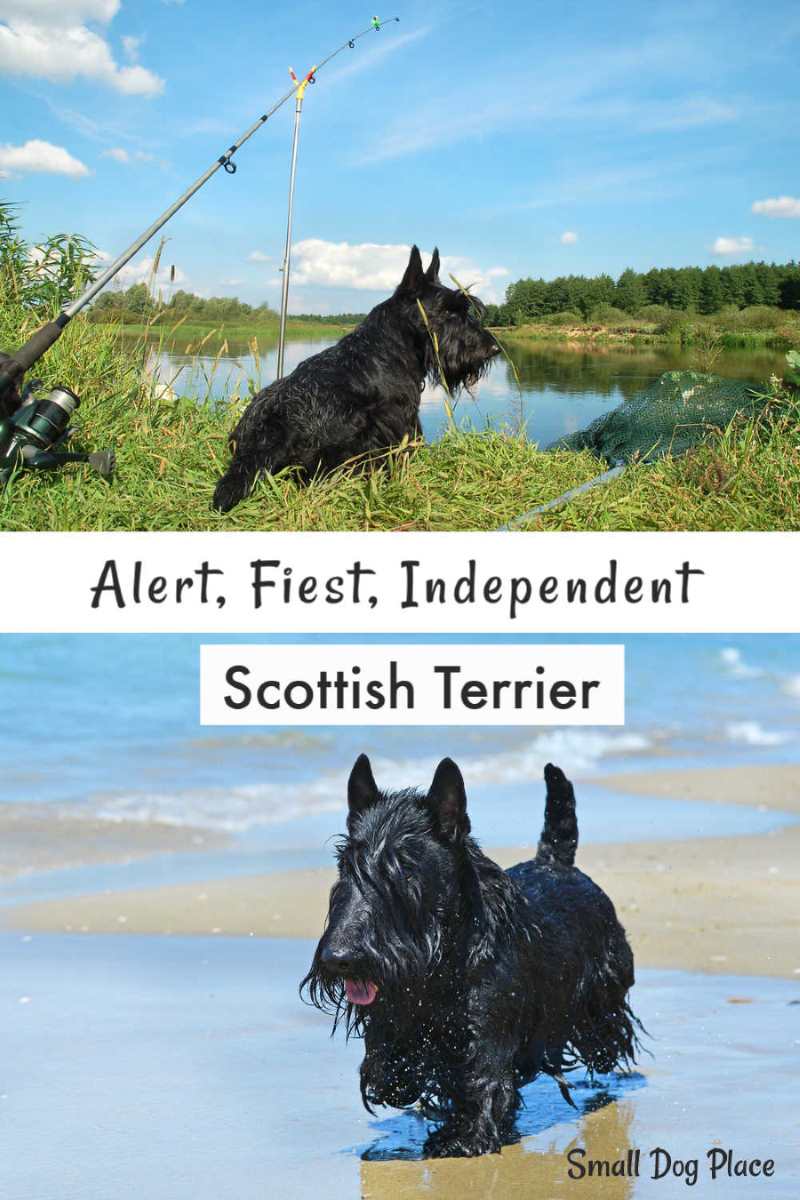