When we think about a dog barking, we don't always make the connection to a child's jabbering.  We once thought that children should be seen and not heard.

Few people abide by this line of reasoning nowadays, when it comes to children, but may feel differently about their dog’s barking. 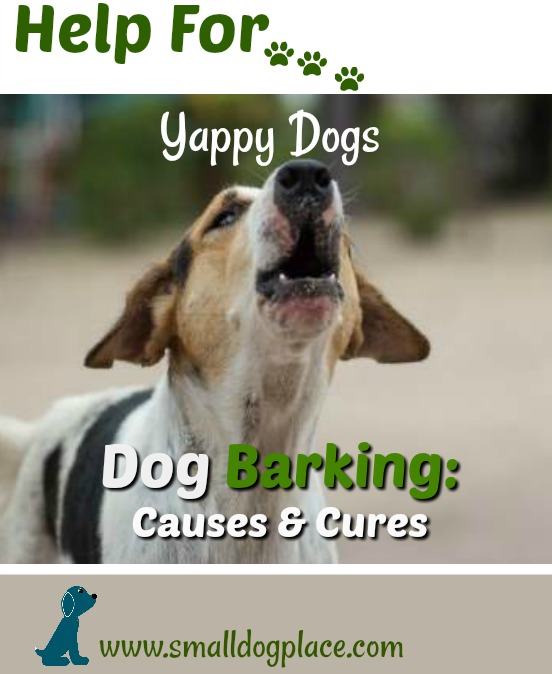 These owners seem to want their dogs to stop barking, period.  According to them, a good dog is a quiet dog, and the only time that barking is permitted is when there’s a man in a black balaclava and stripy prison outfit, crawling in through your bedroom window.

Anyone who ever visited my home knew that I owned dogs.  No way can I keep my dogs a secret as their initial barking is a dead giveaway.

Most of the time my dogs are quiet, however, but every once in a while, they bark and I often can’t find the cause.  A little barking is fine but any constant barking that defies a purpose was a mystery to me.

Your dog has a voice, just like you do, and she uses it just as you do: to communicate something to the people she cares about.

I think it’s reassuring that my dog wants to “talk” to me, to the point that I can overlook the deafening qualities of his voice, which, in enclosed spaces, is positively overpowering.

It’s the thought that counts, even though I feel better-equipped to stand by this smug belief when my ears are sheltered safely behind industrial-quality ear-plugs.

Unfortunately, the language barrier between dogs and humans is solid, which means it’s up to us to use the context, the body language of our dogs, and the circumstances of the vocalization to analyze meaning from a dog barking.

Let’s face it, dogs have learned to understand our language far better than we have learned their vocalizations.  Even if we realize that the dog is trying to communicate, dog barking can be stressful to people.

So why do dogs bark?

“Why do humans talk?”   Let’s start off by saying that dogs bark for many different reasons. A lot of it depends on the breed: some dogs were bred to bark only when a threat is perceived. This is true of guarding breeds such as the Rottweiler, the Doberman, and German Shepherds.

Others were bred to use their voices as a type of tool, to assist their owners in pursuit of a common goal.  A good example of this is the sporting breeds such as Beagles and Bloodhounds who are trained to “Bay” when they pick up the scent of the game.

Some small breed dogs are just yappier than others due to years of breeding for this quality.   Some dogs, I believe just like to hear their own voice and this is particularly common in some toy breeds.  So before we get into how to stop the barking, let’s look at the reasons dogs bark.

Beyond the breed specificity, there are some situations where just about any dog will a bark .  The reasons for dog barking could be

The Six Sounds of the Dog's Language

While this article is about dog barking, it is worth noting that the common bark is not the only way a dog communicates.  There are five more ways your dog may talk to you.

Barking is the main way dogs communicate but there's more to a bark than first meets the eye (I mean ear).  According to Stanley Coren, a well know expert on the language of dogs, we must pay attention to three dimensions of the bark including pitch, duration and frequency.

A low pitched bark means the dog perceives a threat, aggression or is angry.  A high pitched bark may mean just the opposite, according to Coren.  Breed does play a role and small breed dogs often have higher pitched barks.

Typical in puppies, but all dogs regardless of age will whine from time to time.  Whinning is a dog's way of trying to get your attention.

A serious growl is usually a warning from one dog to another or from a dog to a person.  It is a dog's way of saying, "back off."  Dogs also growl when playing.  It's usually easy to know the difference between a play growl and the real thing by watching their body language.

Howling is often a response to a high pitched sound heard only by dogs.  A dog's howling may also encourage other dogs to do the same.  In multi-dog families, all the dogs may howl at the same time, just as wolves in the wild do to communicate with their pack members.

Baying can be heard in hound breeds such as beagles.  Hounds were bred to create a prolonged baying sound to alert hunters during a chase.  It is not common in other breed.

You'll likely to hear this vocalization when a dog is tired or content and ready for sleep.  At other times, dogs will sigh as a way of letting you know they are not happy with you right now. 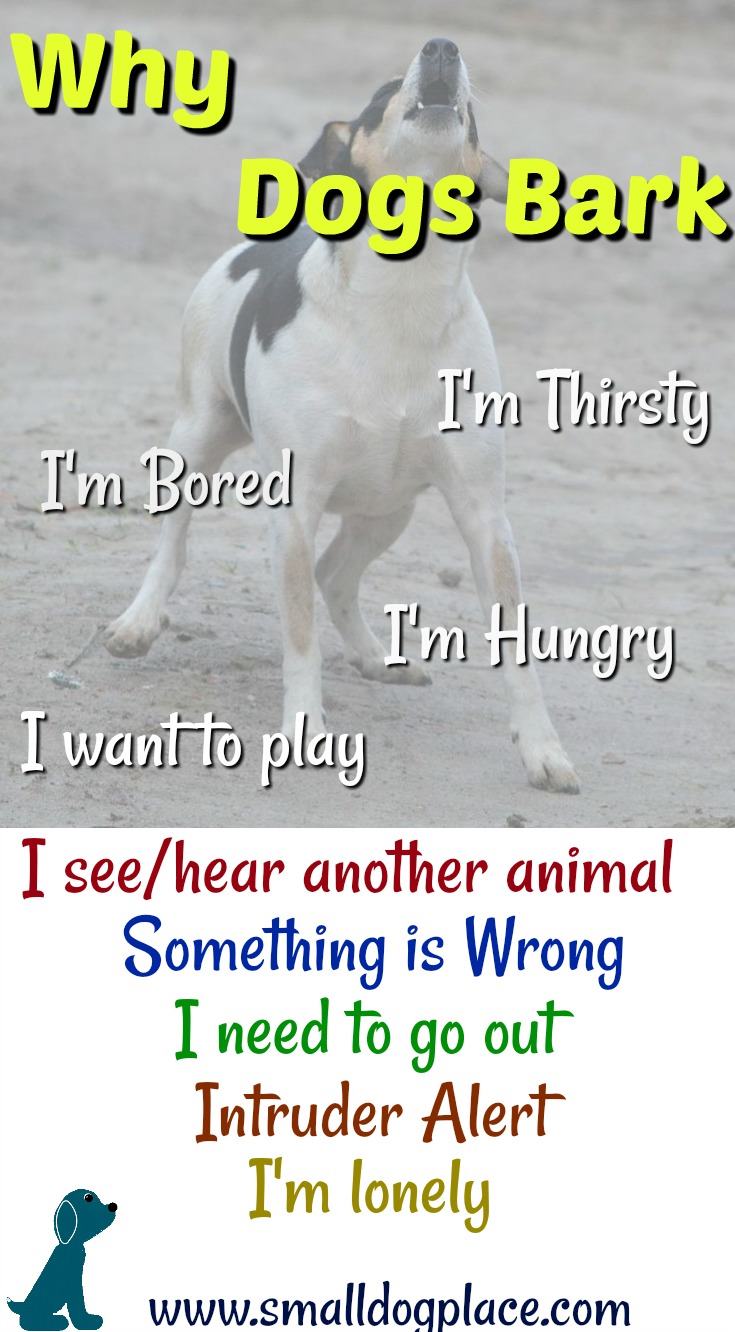 If your dog is barking for any of these reasons, then realistically it is difficult to stop her because, after all, she’s a dog, and it’s the nature of all dogs to bark at certain times and in certain situations.

Likely you were aware of this when you adopted your friend and, if total silence was high on your list of priorities, you’d have bought a pet rock, right?

There are times when barking isn’t only unprovoked, it’s downright unwanted. This can happen during the daytime or worse yet, bark at night when you are trying to sleep.

Some dogs can use their voices as a means of influence. Take this situation as an example:

You’re lying on the couch reading a book. Your dog awakes from a nap and decides it’s time for a game. She picks up her ball, comes over, and drops it in your lap. You ignore her and keep on reading.

After a second of puzzled silence, she nudges your hand with her nose and barks once, loudly. You look over at her and she assumes the ‘play-bow’ position (elbows near the floor, bottom in the air, tail waving) and pants temptingly at you. You return to your book.

She barks again, loudly and, when no response is produced, barks again. This time, she keeps it up. After a minute or so of this, sighing, you put down your book, silence is clearly not going to be part of your evening, pick up the ball, and take her outside for a game of fetch. She stops barking immediately.

I’m sure you know that respect is a crucial part of your relationship with your dog. You respect her, which you show by taking good care of her even when difficult, feeding her nutritious and tasty food, and showing your affection for her in ways that she understands and enjoys.

In order for her to be worthy of your respect, she has to respect you, too. Something that many kind hearted souls struggle to come to terms with is that dog ownership is not about egalitarianism: it’s about you being the boss, and her being the pet.

Dogs are not children although it is easy to think about them as such.  Rather they are most comfortable and best-behaved when they know that you are in charge.

When a Small Dog Becomes a Bully

A dog has to respect your leadership to be a happy, well-adjusted, and well-behaved pet. In the situation above, there was no respect being shown by the dog.

This little episode taught the dog that to get what she wants, she has to make a noise and keep it up until her desires are achieved.  Few people consider dog barking to be a form of bullying towards people!

Affection and play-times are obviously necessary aspects of life with a dog, but they have to be on your own terms.

If she learns that she can get what she wants by barking, then your house is going to become a noisy place which is unlikely to endear you to your neighbors.

To prevent this bullying behavior in your dog from becoming a persistent habit, you have to prove to her that you’re not the kind of person that can be manipulated so easily.

The second most common cause of a dog barking is too much ‘alone time’. Dogs are social animals: they need lots of attention, lots of interaction, and lots of communication.

Without these things, they become anxious.  If you’re at home with your dog, you’re not paying attention to her, and she’s spending a lot of time barking at what appears to be nothing, she’s probably bored and lonely and would benefit from a healthy dose of affection and attention.

A solid foundation of dog obedience training will help you prevent or better control common dog behavior problems.  Some behaviors require the assistance of a professional, but many are the type that you can fix yourself with a little knowledge.

Since I'm a typical "do-it-yourselfer," I enjoy training my dogs at home. How to stop a dog from barking is something that I believe anyone can master.

A syndrome that leads to cognitive decline in senior dogs, called CCD or Canine Cognitive Decline is similar to similar to Alzheimer’s in humans and includes a long list of telltale symptoms including excessive barking.  A normally quiet dog that starts to bark without purpose may be indicative of something else going on.  This is something that should be discussed with your veterinarian.  Other symptoms of CCD include: