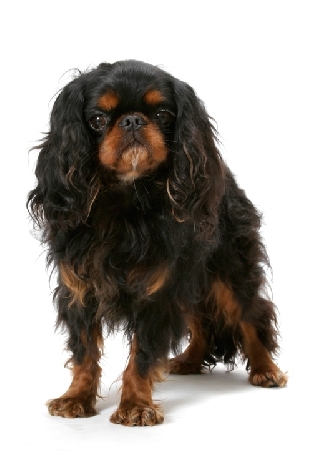 At first glance, you might mistake the English Toy Spaniel for the Cavalier King Charles Spaniel, but they are two distinct breeds.

Although very similar, size and the shape of their heads separates them, with E.T.s or Charlies, as they are affectionately known being the smaller cousin.

To complicate matters further, the names are different depending on what side of the Atlantic you happen to reside.  In the U.S., the name of the breed according to the AKC is the English Toy Spaniel.  In England, they are referred  King Charles Spaniels.   Both are the same dog, just different names.

Developed in England as small sporting dogs, they get their name, King Charles Spaniel from King Charles II, but the name was later changed to English Toy Spaniel in the U.S.

As a breed, these dogs are calm, quiet and dignified.  However, don’t let that proud look deceive you.  They can be very clownish and playful, affectionate and loyal.

Their small size makes them the perfect travel partner, and their quiet nature is a big plus for apartment dwellers.  They do bark, but as a whole are not the yappy type like many other small breed dogs.

Their beautiful face is one of the first things you notice in this breed.  Domed head, short muzzle, and dark dreaming eyes and black noses, these dogs come in four distinct colors. The Blenheim is red and white, and the Ruby is solid red. Prince Charles is tri-color, and King Charles is black and tan.

Charlies will follow in your footsteps wherever you go and prefers not to be left alone.  He can tolerate short absences, but separation anxiety can be a problem in these dogs.

These dogs are entirely inside dogs and should never stay outdoors unless you are there.  He is what is called a brachycelphalic breed so may be sensitive to hot weather.

A little stubborn, Charlies still do well with training if you take it slow and gentle.  All training should use positive reinforcement because anything harsh or negative will only cause him to shut down.

Building a strong bond is what is necessary for successful training, because if he loves you, he’ll try very hard to please.

Ruby (red)
Country of Origin:  England
Activity Level:  Low, Daily walk or active play inside will satisfy his energy needs
Life Expectancy:  10-12 years
Good with Children:  Yes with older respectful children
Good with other pets:  Yes, Dogs and Cats, but may has a tendency to consider small house pets such as hamsters to be prey

History of the King Charles Spaniel 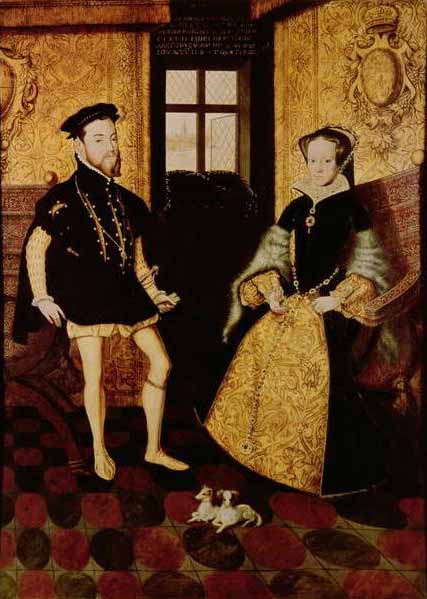 King Felipe II. of Spain and his second spouse Queen Maria I. of England

Thought to have originated in Japan or China, toy spaniels were first seen in Europe in the 16th century.  A painting of Queen Mary and King Philip done somewhere between 1542 and 1587 was the first recorded appearance of these little dogs.

Spaniels most likely descended from dogs that were bred  in ancient China and Japan and were made popular by their imperial courts.

Possibly crossed with Pekingese and Japanese Chin, they eventually found their way to Europe becoming very popular with the royality of the day.  Of English Dogges, written by Johannes Caius in 1574, mentions toy spaniels. It has been said that King James  received a litter of small spaniels from the Emperor of Japan in 1613.

In the early 19th century, small spaniels were crossed with the Pug with the hope to reduce the size of the nose, a trait that became very popular at that time.  Both the King Charles Spaniel (English Toy Spaniel) and the Cavalier were merged as a breed and used for hunting.

They proved to be poor hunters because of their sizeand low energy, but these hunting instincts may still be present.

Remaining popular with the Royalty, they also became popular with everyone else.  They have been pictured in portraits done by Rubens, Rembrandt, and VanDyck.

In the U.S., the breed has appeared in the AKC's records since the club was founded in the late 1880s. Before 1903, the four colors found in the Charlie were classified as separate breeds.  In 1904, the AKC decided  that they should be combined into one breed, the English Toy Spaniel.

However, the breed has not enjoyed a great popularity, unlike the Cavalier King Charles Spaniel in either the U.S. or England.

Today, they are ranked 138th.  For this reason, this breed is considered relatively rare in both the U.S. and in England so finding a puppy may be difficult.  Cost may also be an issue if puppies are hard to fine.

Personality of the Charlie

This could be the quintessential lap dog-quiet, patient, and affection to his human. Many English Toy Spaniels bond with one family member making him or her his person.  While fiercely loyal to “his” person, he will still remain friends and shower his love on all members of the family.

Strangers may observe a more reserved or aloof dog, but never aggressive. It takes awhile for him to make new friends, so socialization is highly recommended beginning after you bring your new puppy home.

They do well with older courteous children but can become stressed in the presence of noisy, boisterous young children.  He is equally happy playing with you or your children or warming your lap.  They enjoy a leisurely walk and will love a short play time, but they are not considered a high energy dog.

Though bred to be a companion, many still maintain a prey drive from days when they were used for hunting.  For this reason, E.Ts should not be not be allowed outdoors off leash.  You might never know when your companion picks up the scent of a chipmunk and takes off towards the road.

Your English Toy Spaniel will alert you if someone comes to the door, or he hears unusual sounds, but they are not considered yappy.  Their quiet nature makes them a popular choice for those who live in apartments.

They are intelligent and should begin training the day you bring your new puppy home.  They do well with gentle, positive training methods that include lots of praise and rewards.  Harsh methods have been known to back fire and should be avoided.  Their quite, stable personality makes them ideal to be used as a therapy dog. 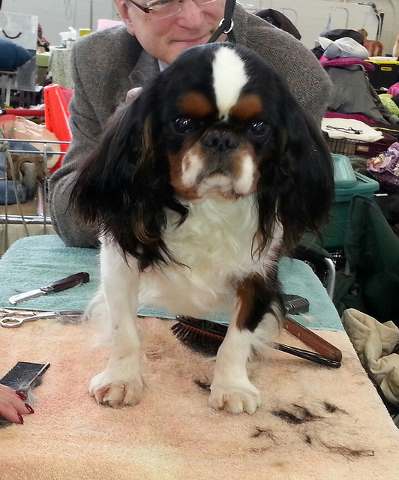 Charles have long silky hair that is usually straight or slighly wavy.  They shed a little, so brushing is important.  They should be brushed at least twice a week and bathed about every two to three weeks.

Since mats can form, a combing after brushing is advised especially near the areas where mats are likely to form:  behind the ears, back legs, and under the front arms.  No trimming or stripping is needed.

All small dogs regardless of breed have the potential to inherit genetic disorders.  Many diseases have genetic tests these days, but not all.  Since tests can be expensive, not all breeders will test although they should.  Not all problems have a test, so a good health guarantee is a safe guard when you are purchasing a new puppy.

The list of health concerns is not meant to scare you, but rather make you aware of some of the issues that have been identified in the breed.  Most members of this breed are healthy and live to be 10 to 12 years old.

Eye problems are common such as entropion and glaucoma. Most breeds with prominent eyes like those of the King Charles Spaniel are prone to problems. Other eye problems can include cataract, distichia, microphthalmia, and keratitis.

Heart problems exist in some and  include mitral valve disease that can eventually lead to congestive heart failure.  Patent ductus arteriosus occurs when blood flows backwards from the heart into the lungs and leads to heart failure.

Like other small breed dogs, patellar luxation is a concern.  This breed also has fused toes, where two or more of the dog’s toes fuse together.  This can cause toe nail problems, but this trait is not considered a problem in this breed.

Due to the shape of their heads, some puppies suffer from open fontanelles or soft spots in the the skull.  Hypdrocephalus or water on the brain causes neurological symptoms that can lead to the dog being euthanized.

Any time a breed is brachycephalic, they are sensitive to other issues such as problems with anesthesia. They can be susceptible to heat stroke in warm temperature.  They may have respiratory issues such as wheezing or snoring.

Other issues include diabetes mellitus, cleft palate, and umbilical hernia.