Once used for bull baiting, these clownish, good-natured, dogs are far removed from the days where they were prized for their fighting abilities.

While still maintaining their protective personality, they are playful, cheerful and make an excellent choice as a family pet, especially for active families. 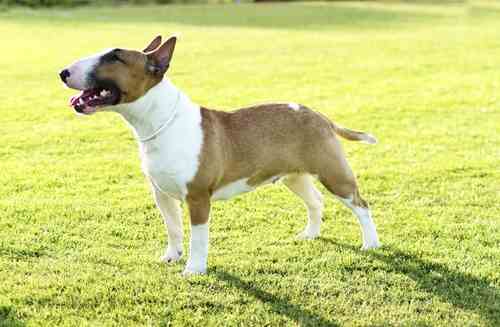 The Miniature Bull Terrier is identical to the Bull Terrier except for the size.  Personality, grooming, health and training requirements are all the same and in fact both breeds were classified as one until 1991 when the AKC made them two separate breeds.

These dogs want to be part of the action and will insist on being included in any family activities, even if it is just a ride in the car. Being terrier through and through, they will keep you entertained with their funny antics and cute personality traits.

Their protective nature makes them great watch dogs, but they are generally friendly with guests once they know the visitor does not mean harm to their beloved human.

Good with other pets:  No, but will do OK with Other Mini Bull Terriers of the opposite sex

History of the Miniature Bull Terrier 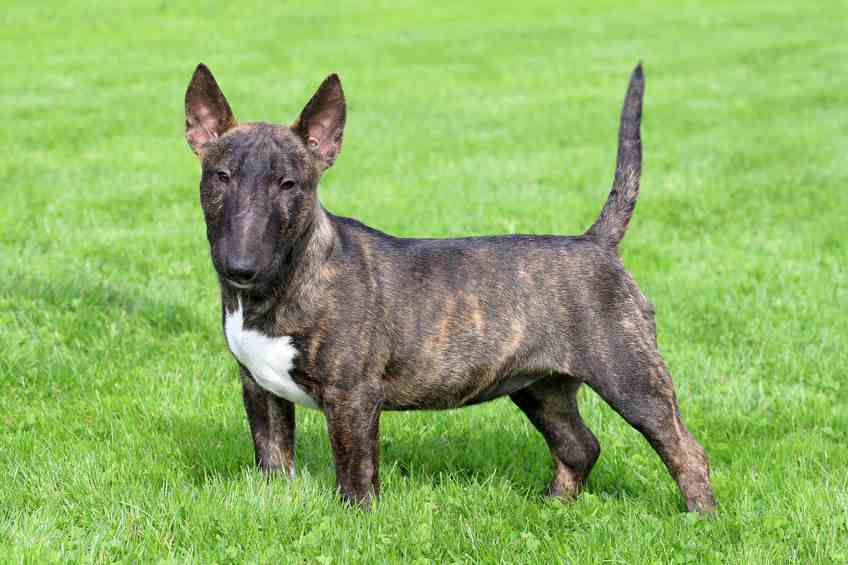 A Miniature Bull Terrier that is Colored With White

Just like most terrier breeds, the Bull Terrier was developed in England in the 1800s.  The Mini's history is the same as his larger cousins because each is technically the same breed.  It wasn't until 1991 that the Miniature Bull Terrier became a separate breed.

Terriers were developed and used in England as dogs that could go to ground and flush out small vermin such as rabbits, foxes and badgers. Sadly, the Bull Terrier also fell into the group of dogs that were pitted against each other or trained to fight another animal for the amusement of the spectators.  Dog fighting was outlawed in England in the 1835 being deemed inhumane.

The breed was developed from the now extinct English white terrier and what was then the bull dog, which did not resemble the modern day English Bull Dog.  From there, a breeder by the name of Mr. Hicks may have also through a Dalmatian and a Greyhound. In 1862, Mr. Hicks introduced his new white breed to the world at the annual dog show.

By the later part of the 19th century, these white bull terriers were exported to the United States and then in 1891, the AKC recognized them and the parent group was formed.

Later, the dogs were then crossed with the Staffordshire Bull Terrier to introduce colors in the genes.

The miniature version of the breed emerged almost by accident.  Smaller versions of the larger Bull Terrier would appear in litters and these smaller dogs would be bred to decrease the size and weight of the breed. By the 20th century, breeders were producing toy, miniature and standard versions of the breed, but the toy version fell out of favor in 1914.

The Kennel Club of Great Britain first accepted the mini as a separate breed in 1939 and then the AKC in the U.S followed suite in 1991.

Personality of the Miniature Bull Terrier 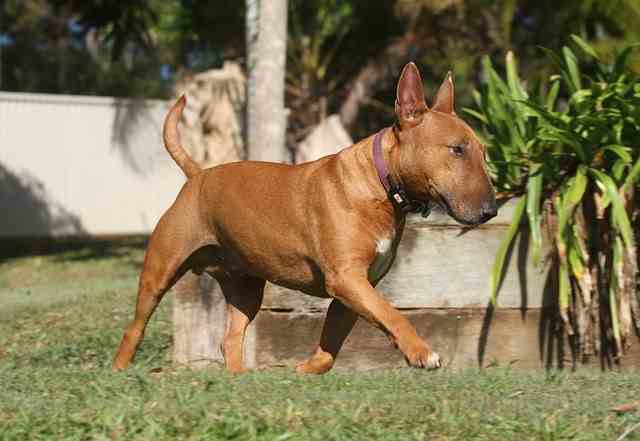 According to the AKC breed standard, the Mini Bull Terrier temperament should be

"full of fire and courageous, but even and amenable to discipline."

The Mini Bull Terrier is a good natured, playful breed but can also be stubborn at times, with a strong personality that may make them a handful for someone who's not accustomed to such an active, rambunctious breed.

They still retain some of those traits that they were once prized for including their fearlessness and tenacity.  They are still very loving and affectionate and bond very closely with their favorite humans.  They have been known to suffer from separation anxiety so early training will be important.

Many owners will consider their little Mini Bull Terriers to be quite the clown and have an entertaining personality that's hard to resist.

Even though some consider them to be one of the bully breeds, they are not aggressive and definitely not dangerous to people.  They can be very possessive of toys and food and should be trained early to assure this issue doesn't become a problem later on.  They may not tolerate other pets including cats well.  They do better with dogs of the opposite sex, but can be aggressive with dogs of the same sex.

Any highly intelligent breed can get bored easily, so anyone looking for a lively, playful companion do expect to do some training and socialization early.  The Miniature Bull Terrier is no exception. Their energetic nature makes them an ideal choice for active families, couples and singles who have the time to provide enough exercise and stimulation.

They do very well with older children, but their exuberant nature may make them a bit overwhelming to very young children.  Between their high energy level, their shear strength and their love of playing rough, young children and elderly people may discover this breed may not be a good choice.They require firm handling and good training from the start to curb any negative traits that they may acquire.

Being the spirited dog that they are, they would do best in a situation where there would be plenty of room to run.  They can adjust to apartment living, as long as their owners make time for long walks, romps at the park, or an active game of fetch. 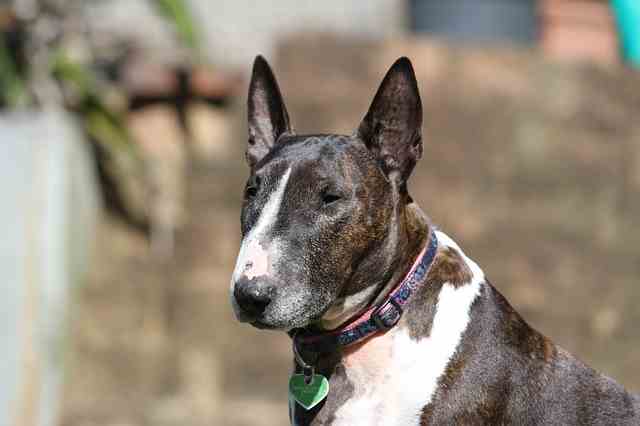 Training and socialization is best done as soon as the puppy arrives at their new home.  They respond well to positive approaches but do not do well with a harsh negative trainer.

Treats work very well, but they do have a very short attention span.  Short sessions spaced over the day work much better than a long designated training session as they will lose interest quickly. 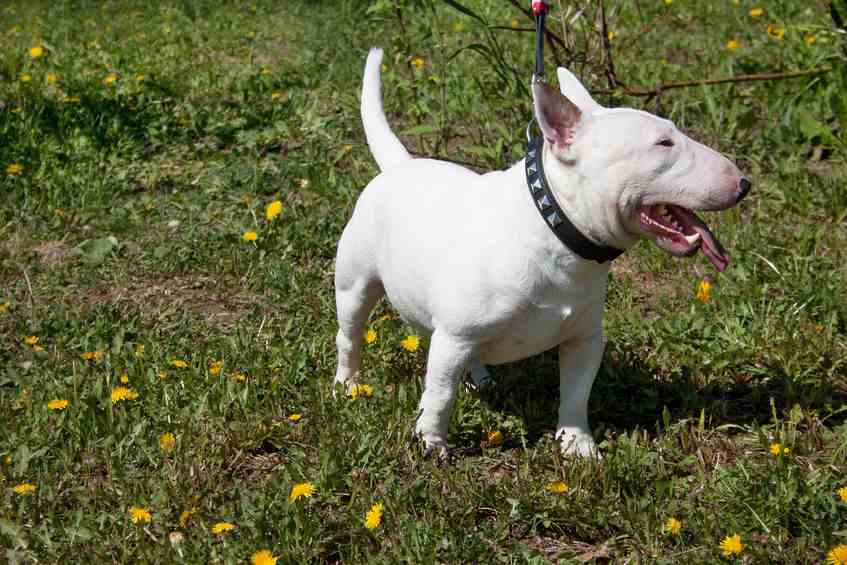 Grooming is a breeze with these dogs.  Their short, sleek coat should be brushed once a week and bathed occassionally.

Ears should be checked and cleaned as needed, but their are not prone to ear infections, so a weekly cleaning with a good ear cleaner is all that is necessary.

Their nails do need to be kept short and this can be accomplished by a nail trim or grinding down through the use of a dremel type tool.

Their teeth do need to be brushed or cleaned as often as necessary to keep them looking their best.

A little sunscreen is also highly recommended for this breed especially on areas with a scant amount of hair.

Like all breeds, these dogs are healthy, but some genetic health concerns have been identified. Even though the following list seems long, it does not mean that your Mini Bull Terrier puppy will be affected by any of them.  It is good, however to do a bit of research on the breed of your choice and know what the possibilities are so you will be able to make an informed decision.

Deafness is a problem in the breed and all puppies should be BAER tested before going to their new homes. BAER stands for brainstem auditory evoked response and this hearing testing detects electrical activity in the cochlea and auditory pathways of the brain.  It can determine whether the dog can hear but not the quality of the hearing.

Several other conditions have been identified in this breed. Patellar Luxation and Primary lens luxation.

Other problems include polycystic kidney disease (PKD), Bull Terrier hereditary nephritis (BTHN). Both of these conditions are often called silent killers because no symptoms show up until the dog goes into kidney failure.  Tests can be done on any dogs used for breeding.

They are also at some risk for a couple of heart problems including aortic valve stenosis and mitral valve dysplasia. These potential dangerous conditions can lead to congestive heart disease and even death. Breeding dogs should be screened by a  board-certified veterinary cardiologist before being used.

Potential puppy buyers are urged to discuss these issues with the breeder of their choice and find out what testing has been done before considering a purchase.

Patellar luxation is common in small breed dogs and refers to a condition where there is a dislocation of the kneecap either in one or both legs.

Mild forms usually do not require treatment, but when the problem becomes more severe, the dog may experience pain and limping.  Treatment may involve rest, medication, and surgery as a last resort.

This is a painful condition that causes blindness in many breeds especially terrier type breeds.  When the tiny fibers (called zonular fibers) that hold the lens of the eye in place collapse, the lens moves  If the lens falls into the anterior chamber of the eye (front of eye) glaucoma and loss of vision occur.

Bruce was the name of the Bull Terrier owned by the 28th president of the United States, Woodrow Wilson

A white dog with a painted red circle around his eye is named Bullseye and is the mascot of the Target stores.

Grimm is the bulldog from the cartoon series Mother Goose and Grimm.

For the Mini Bull Terrier Lover

How Much Do You Know about the Miniature Bull Terrier?

If you enjoyed this breed, you might want to check out these other breeds.