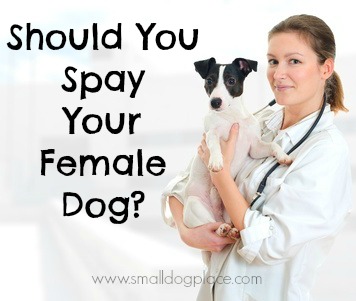 Spaying your dog is another area of controversy in dog circles.

Should you spay or neuter your dog and if so, When?

For most people in the shelter/rescue camp, there is no question. Spaying (female dogs) or neutering (male dogs) is the responsible thing to do. The general mantra of these organizations is to sterilize your dog so they will not contribute to the overpopulation of shelter pets.  If you choose not to spay,  your pet will suffer all sorts of unwanted health problems.

Radicalized animal welfare folks blame the world’s overpopulation of dogs on breeders—all breeders.  They believe that all dogs should be neutered or spayed which would virtually eliminating the need for shelters and rescue groups or pet ownership for that matter. I often wonder where these radical organizations will go for funding if they manage to wipe out the entire world’s pet population.

Spaying and Neutering has become the chant of the entire rescue culture. As the story goes, if more dogs were neutered or spayed, there would not be a population overload at neighborhood shelters. Dogs would not need to be euthanized and all dogs could find a home. How much of it is true, and how much fabricated?

It is true that the pet overpopulation at least in the U.S. has been the main impetuses behind at least 30 years of national and local spay/neuter campaigns. Many campaigners encouraged the early spay/neuter of shelter dogs even before they turned 6 months of age.

Shelters could feel good that the dogs they adopted out would not contribute to the overpopulation. Owners would feel right that their puppies not only would not procreate, but also would be saved from the numerous diseases affecting their intact cousins.

Most people are told that spaying their dog on or before six months of age is all part of being a good pet parent.

This advice sounds so much like a command that puppy owners do not even consider any alternative course. The reason behind this line of thought is that after six months of age, dogs are likely to enter puberty and females may go through their first heat cycle.

Spaying before this time eliminates the hassles of keeping them confined and avoids any mess associated with the heat cycle.

Newer research is showing that spaying your dog may not be the definitive activity that all pet owners engage in when their puppy reaches their 6-month birthday.

Much of what we believe about spaying and neutering dates back to the 1970s, when shelters were being overcrowded. Dogs could not be adopted out so many were euthanized.

To complicate matters more, not all veterinarians agree on the best time to neuter/spay or even to do it at all.  Research is available, but not all research is reliable.  Take the controversy over early spaying.

Some research has shown that there is an increased risk of joint problems and cancers in dogs that were spayed young.  Another research shows just the opposite:  There are no problems.

Spaying Your Dog:  What is Involved? 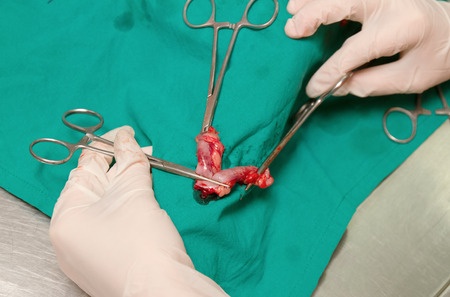 Uterus and Overies Being Removed from a Female Dog

Spaying your dog (ovariohysterectomy) is a major operation that is done under general anesthesia. The Uterus, Ovaries and fallopian tubes are removed which stops the production of female hormones such as estrogen and progesterone.

Problems That Can Occur After Spaying Your Dog

Girls will have their first cycle anywhere between 5 and 12 months of age.  Their genitals swell and nipples enlarge.  The entire cycle last about 21 days.  The first portion of the cycle (1 to 12 days), the dogs produce a bloody discharge that has a distinct odor.

She becomes flirtatious if males are around, and may find ways to go out of the house to explore.  A doggie diaper will prevent any mess, but there is nothing you can do about the behavioral aspects of canine heat cycle.

Dogs that normally would never climb over or dig under fences became adept at these gymnastics.  Some will find every reason to dart out and wander away, which is a dangerous activity.  Even if your girl does not get out, it’s possible that a neighborhood male dog might pick up her scent and come a’ courting.

Once her discharge has changed to clear or ended entirely, she will accept mating by a male, whoever might be available.  Heat cycles are repeated every 6 to 9 months throughout the dog’s life.

Advantages of Spaying Your Dog

According to most sources, spaying your dog prevents any unwanted pregnancies. Rescue organizations, shelters, breeders, and veterinarians maintain that neutered pets are healthier, better adjusted and develop closer bonds with their owners than intact dogs.  Are there any other advantages to spaying other than birth control?

Disadvantages of Spaying Your Dog

So, how does one decide what is best for their dog.  Begin by examining the advantages and disadvantages of spaying your female dog.

The best advice that I can give to you before you make any decisions is to consult with your veterinarian.  He or she will know the risks associated with your breed and can advise you.

Unless there are some underlying health problems that might disqualify your little girl from being spayed, I generally recommend spaying for any dog that is not being used for breeding purposes.