5 Tips for Dealing with An Aggressive Dog

There are many reasons why your dog might be aggressive. But it’s important to keep in mind that in most cases, aggressive behavior isn’t inherent or genetic.

Often, it’s because the dog was improperly trained, by either the current or previous owner. Lack of socialization, traumatic past events, illnesses, and the denial of basic necessities like food and shelter, are all contributors to canine aggression. 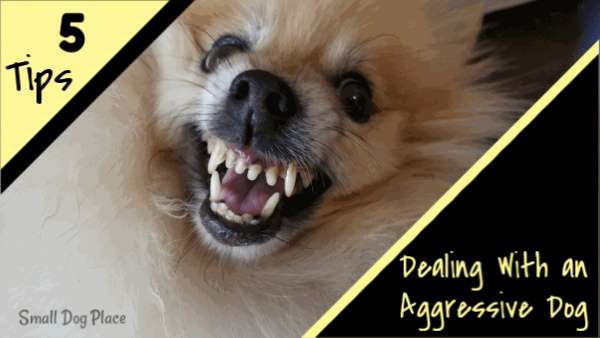 Dealing with an Aggressive Dog

Dog that are very powerful—like the Pitbull or Cane Corso—can be very troublesome if they’re too aggressive. If your dog begins to snap at every person and animal, and possibly even at you, it’s time to take some evasive action. Here are five tips for dealing with aggressive dogs: 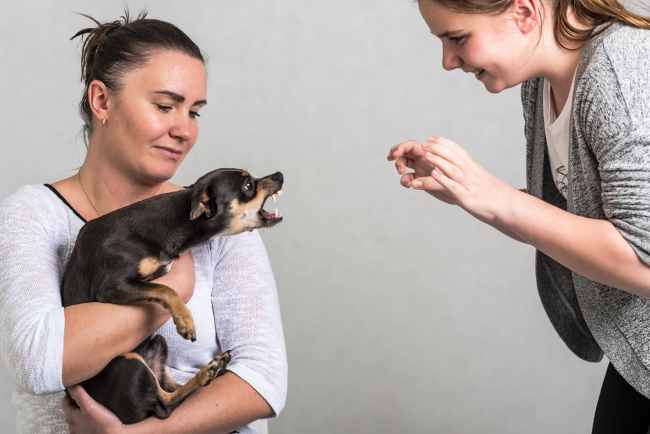 There are multiple types of dog aggression, and understanding various types can help you better create a training system at home. Here are some types of aggression to look out for:

Possessive Aggression has its origins long before dogs were domesticated.  When they were in the wild, dogs needed to compete for everything including food, mates and nesting places.  They quickly learned how to guard what was theirs, fighting if necessary.

In the average home dogs no longer deal with these harsh realities but some of the behaviors linger so you may see this type of aggression when your dog guards their food, favorite toys or even their sleeping area.

Possessive aggression is found in both males and females, adults and puppies.

This type of aggression goes back to the fight or flight reaction.  When someone encounters something scary, they have a choice to fight or flee.  When fleeing from the scary thing is impossible, they will fight.

This is what is happening in dogs.  If a dog feels trapped, she may fight. Sometimes a fearful dog will cower but if the scary person reaches for them, they will bite.  They may also attack when the person turns his back to leave. Fearful dogs  may or may not show any typical warning signs such as growling or showing teeth, thus catching the person off guard.  Both males and females are prone to fear aggression and can be observed in puppies and adults.

This type of aggression is very similar to fear induced aggression and the dog is still driven by fear. Here the dog decides the best course of action is just to attack.

They will show signs of aggression such as body posture, growling and showing teeth and may attack whether the person freezes or continues to come close.  Retreating may be the only way to avoid a dog like this.

Both males and females show this type of aggression but adults are more prone to this than puppies.

Social aggression is rooted in the group or pack and can become a problem between dogs or between dogs and people. There is an unwritten hierarchy in a dog pack where everyone understands where they stand in the pack.  To keep the peace, dogs will respect this and allow the more alpha members to eat first, pick a mate or get the attention from the person or people in the household.  People in multi dog households will see samples of ritualized aggression such as soft growls or a snarl if they perceive another dog member has crossed the line.

Where this type of aggression becomes a big problem is when it involves dog and person.  If a dog has been allowed to rise up to the top of the hierarchy above a person in the household, the dog can become aggressive towards that person if the dog decides the person has crossed the bounds, he may show aggression.

Like wolves and other wild canids, dog are predatory animals.  Some breeds are more so than others. Dogs will chase cars and people who are running, skating or bicycling.  They will chase other animals.  If the dog is large and powerful enough, he can cause major harm on what he is chasing.

Attacks can come out of the blue dogs that are showing predatory aggression rarely show any of the typical signs of aggression.

When dealing with an aggressive dog, pay close attention to the signs that your dog is exhibiting. Create a list of those signs, and use it as a springboard for coming up with an aggression-curbing plan.

For instance, you might notice that your dog doesn’t like when anyone comes near or touches a certain chew toy (possessive aggression). Note this, and as you research different types of aggression or prepare to speak to a trainer, be sure to consider this.

Dealing with an Aggressive Dog: Establish Dominance in the Home

Sure, you most likely already use a leash with your dog outside of your house. But to gain dominance and control over your dog, you should consider using a leash indoors, too. For example, if the dog continues to jump on furniture, you can pull the leash to restrain them.

You should also use a crate for your dog. This might be painful for you to do, but until your dog understands the chain of command and has relaxed with aggression, you should put them in a crate for them to sleep—or whenever they become aggressive.

With aggression comes the idea that the dog is the alpha, and by eliminating that, your tactics will be much more effective.

If you are dealing with an aggressive dog, first establish dominance in the household. Assure that all humans are always more dominant than the dog and that includes small children.

Dealing with an Aggressive Dog: Know the Punishment Line

There’s a fine line between using a leash and crate to control your animal, to using punishment tactics. Owners who punish their dogs for being aggressive will find that the issue is likely to escalate.

Think about it in human terms: if you hit or punish an already aggressive child, chances are their anger and distaste for your will begin to pent up over time. Similarly, if your child was scared of the dark and threw tantrums at bedtime as a result, you wouldn’t force them to sit in a dark room to get over their fear. This would certainly worsen the core problem.

Punishment creates a toxic environment for both you and your dog. Punishing a dog for their fear or aggression builds even more fear and aggression, which will eventually lead to them lashing out.

As a result, something serious could happen, and before you know it, you’re dealing with a dog with a biting problem.

Use positive reinforcement for dogs instead.

Try CBD Treats for Dealing with an Aggressive Dog

CBD-infused treats are a safe, non-toxic way to let your dog snack. Although CBD derives from marijuana, there are several important factors to consider.

First and foremost, although there’s a stigma surrounding cannabis, several studies have demonstrated its immense array of benefits, which is why several states have legalized it, or are in the motions of doing so.

Secondly, Cannabidiol is just one out of over 100 active cannabinoids that have been identified in cannabis. CBD is a non-intoxicating cannabinoid pulled from hemp. This is not to be confused with THC, which is the chemical in marijuana that gives you the feeling of being “high.”

Therefore, you cannot get “high” from CBD, making it a perfectly safe and natural way to treat aggression in pets. CBD is currently legal in 30 states, many of which haven’t yet legalized traditional THC cannabis.

Today, CBD treats are very popular. The CBD company Plantacea, for example, specializes in dog treats infused with CBD to treat a variety of conditions, from nervousness to aggression to loss of appetite.

Here’s how it works: your dog has natural cannabinoids in their body, called anandamide. The cannabinoids in CBD dog treats attach to the receptors in your dog’s brain, accentuating the already-existing anandamide that exists.

Dealing with an Aggressive Dog: Talk to Your Vet

As previously mentioned, an underlying illness can be cause for aggression in dogs. If your dog is more aggressive than normal, and you’ve tried several tactics at home, it’s best to take them to see a veterinarian.

For example, hypothyroidism or epilepsy can lead to aggressive behavior in dogs. If your vet determines that there is no medical issue, it’s time to call in a professional trainer for some assistance.

5 Tips for Dealing with an Aggressive Dog by Susan Combs

Susan is a Pet Health and Safety expert. Her specialties include keeping up with important issues regarding pet health and pet care, working closely with pet parents to find answers concerning training, grooming and caring for specific breeds of dog.

Other articles by Susan Combs includes: