Giardia in Dogs:
Another Parasite You Should Know About

As parasites go, giardia in dogs is a particularly nasty bug that is not only difficult to get rid of but causes vomiting and diarrhea especially in young puppies 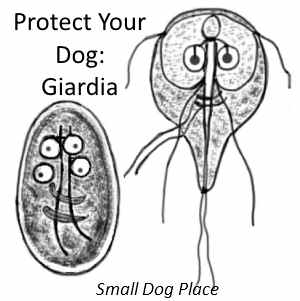 What is this Parasite?

Giardia in dogs is another annoying parasite that can affect your dog’s health.  This small protozoan, Giardia is not a worm, but a one-celled organism that is also capable of causing harm in many animals including people, although it’s not entirely clear how common the transmission is between dogs and people.

It is a very common parasite found in dogs, cats, horses, pigs, cows, sheep, and goats. The resultant disease is called giardiasis.

How Do I and my Dog Get this Parasite?

People get giardia when they sample contaminated water usually on a camping trip and the resulting vomiting and diarrhea is called traveler’s diarrhea.

If you are an outdoors type of person, you might have heard of beaver fever or backpacker disease.  These are all caused by the giardia organism.

In dogs, the most common form of transmission is through the fecal—oral route where dogs either come in contact with infected feces, water, or surfaces that contain the giardia cysts. They can do this by eating the cysts directly, sniffing infected poop and then licking their lips, or drinking contaminated water.

The infection is easy to pick up because the Giardia cysts are very resilient and contagious immediately after another animal has excreted them.

When there is high humidity, the survival rate of the cysts increase and when there are more animals in the area, infection is inevitable.   This is why you see these infections in shelter dogs, pet stores, and multiple dog homes.

Life Cycle of Giardia in Dogs

There is much that veterinarians do not know about the life cycle of this one celled organism.  This protozoan appears to have a two stage life cycle.

To begin an infection, a dog ingests a cyst usually through eating poop, infected grass or drinking contaminated water.  The cyst pasts through to the dog’s small intestine where it opens up and releases an active version called a trophozoite.

During this stage, the tiny organism is motile and lives in the small intestine of its host.  Here it attaches itself and dines on the cells lining the intestines.  This causes poor digestion which leads to diarrhea. This stage will reproduce by dividing and then many will produce hard cysts around them.

These cysts are then shed in the stool where they can infect another dog or other animal that comes in contact with the infected feces. Once the second dog swallows the cyst, it migrates to the small intestine and the process begins again.

This hardy cyst phase can exist in the environment for up to several months, especially in water and damp locations.

Giardia in dogs is common, but also occurs in farm animals and people.  There seems to be different groupings of these organisms called Assemblages that affect different species of animals.

For example, dogs tend to have assemblages C and D, cats are infected by A1 and F, and humans are normally more susceptible to A2 and B.

This is good news for people since it is possible to contract giardia from dogs, it is not likely, but again there is much to learn about this parasite. When humans acquire this type of infection it is usually as a result of coming in contact with contamination from human waste.

This often occurs when giardia enter the public water supply.  Outbreaks have known to happen even in day care centers where there is a breakdown in good hygiene practices.

Symptoms of Giardiasis in Dogs

If your dog has foul smelling diarrhea, that can range from soft to watery with traces of mucus he might have giardia. Sometimes blood is seen in the stool.

Vomiting is another symptom and sometimes fever.  If symptoms persist, the dog may also lose weight.  Often dogs that are infected with giardia show no symptoms at all.

Luckily, this is not a life threatening disorder unless the dog has other underlying problems that might cause him to be immunocompromised.

Diagnosis of Giardia in Dogs

You will not be able to diagnosis this yourself as the parasite is microscopic and only detected through laboratory tests that are performed by a veterinary hospital or outside laboratory. Giardia is often misdiagnosed or underdiagnosed because it is difficult to see.

There are several ways to observe the cysts, but since cysts are not shed continually, it is very possible to receive several negative test results, but still have the disease.

There are several tests that are often used including a direct smear using a fresh, unrefrigerated sample, fecal flotation, and a fecal ELISA called the Snap® Test.

If a fresh sample is observed under the microscope, the more active form or trophozoite can sometimes be observed moving around.  When a fecal flotation method is done, the vet tech is looking for the cyst stage.

Unfortunately, both positive and negative results can be confusing.  Many dogs many shed the cysts without having any symptoms, whereas some who have symptoms and the disease may not shed any cysts on the day of the test.

Some veterinarians will repeat a test that has negative results when the dog shows the classic symptoms.

Drug Treatment for Giardia in Dogs

Here is another area of controversy in the veterinary profession:  How and when to treat?  Some vets will treat even with a negative test result if the dog is showing other signs of the disease because there is a potential for human infection.

There are several drugs on the market that will treat the infection but all require multiple days to administrate the medications.

Metronidazole is an antibiotic which is given for 5 to 7 days.  Going by the trade name, Flagyl, this older treatment is about 60-70 effective for the treatment of giardia, but will treat other bacterial causes of diarrhea.  Side effects of this drug include vomiting, anorexia, and liver toxicity.  It cannot be given to pregnant dogs.

Fenbendazole, or Panacur, is a worming medicine or antiparasitic that also treats other types of parasites and is given for 5 days to treat giardia. This is considered to be safe in young puppies at least 6 weeks old.

Sometimes, a combination of metronidazole and fenbendazole are given.

Environmental Treatment of Giardia in Dogs

Bathing is also required as the dog is being treated to remove any fecal debris and eliminate any cysts that might remain on the dog’s hair or fur.  When there are other dogs in the household, they all may be treated at the same time.  A regular dog shampoo is usually sufficient to remove all fecal debris.

It is difficult to decontaminate soil, grass or remove standing water in the outdoor area.  Cysts will not survive in dry conditions, but prompt removal of any feces will help eliminate the problem, at least in areas where there is not much rainfall.  In moist or wet areas, it is nearly impossible to remove the threat entirely, but quick removal of the dog’s poop will help.

Inside, any surfaces the dog comes in contact with can be cleaned and sanitized using steam cleaning or disinfectants.

For disinfecting surfaces, such as floors or crates, you can use chlorine bleach at a rate of 1-2 cups per gallon of water.

Other chemicals such as quartenary ammonium or Lysol work well to kill the cysts.  Clean, disinfect, and allow to air dry before allowing your dog to have access to the area.

The longer the disinfectant stays on the surface the better the chances that all cysts will be killed.  Ten minutes is usually a good ball park figure to aim for if you are spray with a bleach solution.

This is still another area of controversy.  To be on the safe side, you should consider the possibility that the giardia that infects dog could potentially infect people.

Most sources, however, suggest that Infection is low between dogs and humans.  People who have diseases that might increase their susceptibility to infection should limit their exposure to dogs being treated for giardia.  We are including people in this category that are immunodeficient such as those with AIDS or cancer, or those who are undergoing chemotherapy.

If you do develop gastrointestinal symptoms after being exposed to an infected dog, it would be advisable to seek medical attention.

Always wash your hands before and after feeding and handling the dog and of course after cleaning up soiled areas.

If you have children, encourage children to get into the habit of washing their hands regularly especially after playing with their dog.

References and Further Reading on Giardia in dogs

Centers for Disease Control and Prevention

Other Types of Parasites in Dogs 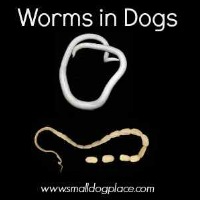 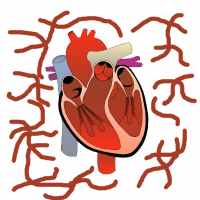 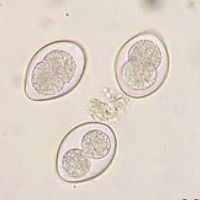