Cavalier King Charles Spaniel Fanciers use words such lovable, sweet, gentle, playful, devoted to owner, lap warmers and bed companions to describe this little cutie who has grown in popularity over the last couple of decades.

The Cavalier is one of the most popular breeds in the UK and gaining in popularity in the US. 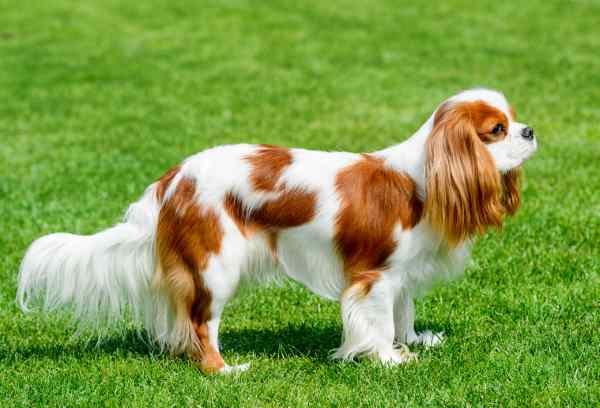 At 13 to 18 pounds and 12 to 13 inches in height, it is among the largest of the toy breeds recognized by the American Kennel Club, yet still small for being a spaniel.

These little guys are friendly, easy to train, good with children and very adaptable to many different living arrangements.

While new on the scene with the AKC, becoming the 140th breed, the roots of the Cavalier King Charles Spaniel goes back to the time of Charles II.

The most endearing characteristic of the Cavalier King Charles Spaniel is his face with dark soulful eyes.

Their devotion to their families makes them wonderful companions when their people are nearby.  When left during the day or for long periods of time, these dogs do not do so well.

In general, the Cavalier King Charles Spaniel is not a yappy breed and does not make a good guard dog.

Their friendly nature assures that any stranger entering the home is just another friend that they have yet to meet.  While mostly friendly, some can be timid at times and stubborn. 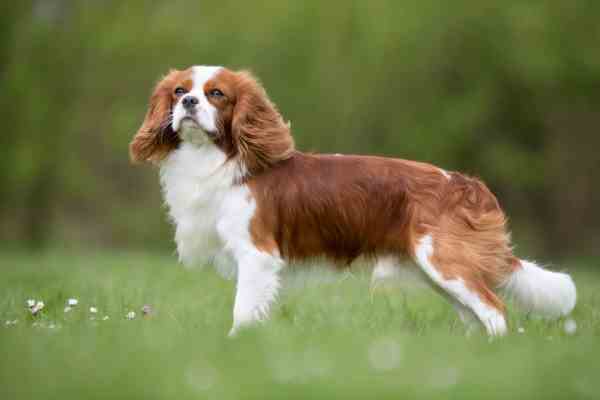 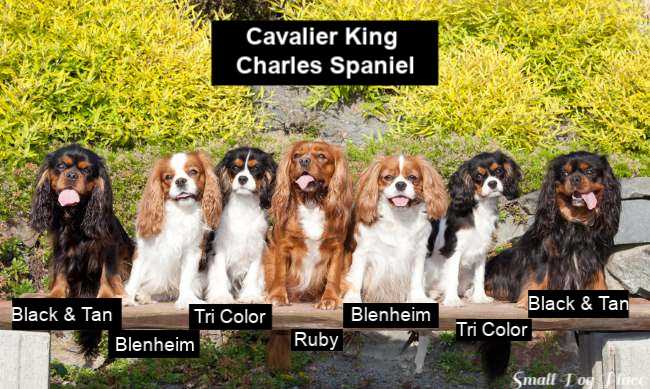 Little toy spaniels were very popular among royalty in the 16th through 18th centuries, serving as lap dogs and companions  and even bedfellows to noble families in England.

It is these little dogs that have been depicted in famous paintings that are the forerunners of the modern day Cavalier King Charles spaniel.

Mary Queen of Scots had a little spaniel and King Charles II was said to have had at least two or three of these little dogs following him wherever he went. 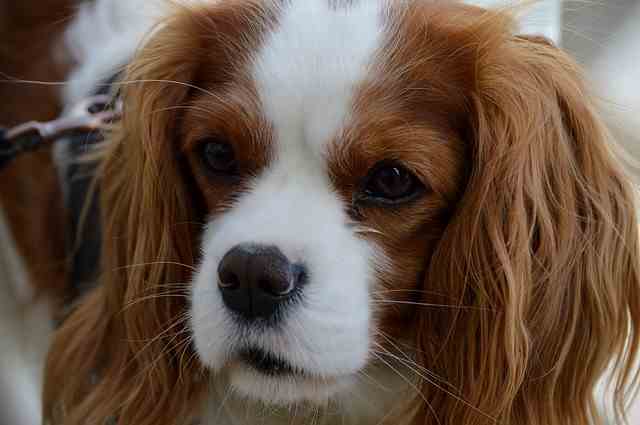 He went so far as to decree that spaniels should be allowed in all public places including the Houses of Parliament. The little spaniels remained popular until Charles II death when Pugs became the new favorite.

It is said that the spaniels were bred with the pugs to create a newer version of spaniel with shorter noses and domed shaped heads.

The Benheim coloration that we know today originated in Blenheim Palace, the country estate of the Dukes of Marlborough where the strain of red and white toy spaniels continued to be bred.

It was probably a rather haphazard breeding program as there were yet to be any standards written or dog shows.   It wasn’t until the mid-19th century that dog shows became popular and English breeders began to define the different breeds that we know today.

At that point in history, the toy spaniel was described as having a flat face, undershot jaw, domed skull and large front facing eyes.  This is a far cry from the original spaniel found in paintings from the 16th century.

In the 1920s, Roswell Eldridge, an American began searching England for toy spaniels that resembled those in the old paintings.

He urged the Kennel Club to allow him to offer 25 pounds sterling for the best dog and best bitch resembling those seen in paintings of King Charles II's reign.

Finally in 1928, Miss Mostyn Walker presented a dog named Ann's Son for evaluation and was awarded the 25-pound prize. Sadly, Roswell Eldridge didn't live to see the prize claimed, as he had died just one month earlier.

That was all that was needed to get the momentum rolling and soon a breed club was formed.

The name Cavalier King Charles Spaniel was chosen to differentiate it from the flat faced King Charles spaniel, also known as the English toy spaniel in the United States.

Standards were written and Ann’s Son was considered an example of the breed.  The Kennel Club did not immediately recognize the new breed and it wasn’t until 1945 after years of work that it was finally recognized as a separate breed. 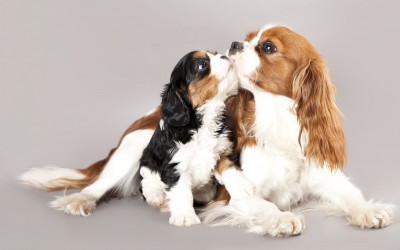 In the United States, the beginning of the Cavalier dates back to the 1950s.  Mrs, Sally Lyons Brown of Kentucky was given a tan bitch puppy by her English friend and then imported more.

She was unable to register her dogs with the AKC, so she began the Cavalier King Charles Spaniel Club in the USA.  (CKCSC, USA).

They did not push for full AKC recognition because they feared that too much popularity would lead to breeders who wouldn’t maintain the high standards they had established.

The AKC invited the CKCSC, USA to become the parent club of the breed in 1992, but the members refused.

A small group of CKCSC, USA broke away and formed the American Cavalier King Charles Spaniel Club (ACKCSC) and applied to the AKC for parent-club status. AKC recognized this parent group and granted official recognition of the breed in 1995.

Today, the CKCSC, USA is still an independent breed registry, but the ACKCSC is the parent club for the breed within the AKC.

The Cavalier King Charles Dog Breed at a Glance 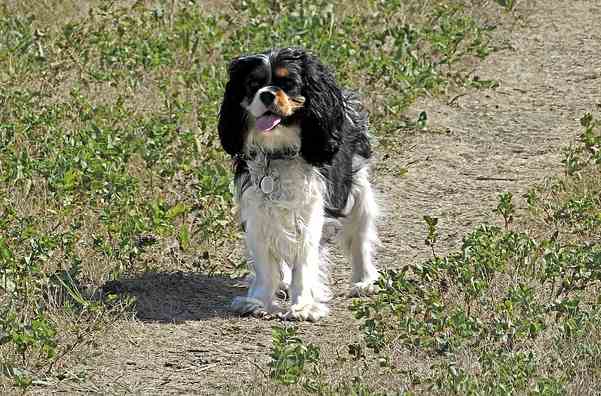 If affection and devotion are your prerequisites for owning a dog, then this breed might be perfect.

They are patient, eager to please and highly adaptable.  This makes them a great choice for families with children and other dogs, because Cavalier King Charles Spaniels love both.

They are also popular among seniors as their demands are low and love high.  While they have a playful nature and a curious temperament, they excel as lap dogs making them good candidates for therapy work and elderly owners.

Don’t expect them to be a good guard dog, because they are likely to love each and every one that comes through your door.  Even though they may be one of the smallest spaniels, they are still true to this group of dogs.

As such, they may chase anything that runs in their path, including cars, so leash training is a must.

As far as train-ability is concerned, Cavalier King Charles Spaniels are naturally well behaved, and training is easy.

They do well with positive reinforcement and a gentle approach.  They do not do well with any harsh or negative treatment.

They participate in obedience and agility and excel as therapy dogs.   These dogs do need to be socialized early because of their natural tendency to be timid.  Without training this shyness can develop into phobias.

Grooming the Cavalier King Charles Spaniel is relatively easy making it an ideal breed for those who do not see themselves spending hours providing a spa experience for their pooch. Even though the Cavalier’s coat is medium long, it is not clipped.

They are naturally clean dogs so a daily combing and a weekly bath, along with other regular grooming tasks may be all that is necessary to keeping them looking great.

The silky coat of the Cavalier is easy to keep clean and shiny using a firm-bristled brush and wide-toothed comb several times a week to keep tangles away. They do shed, though, so folks with allergies may want to consider a different breed.

Tooth brushing once a day and nail clipping are important for health or if you prefer, use a dremel tool to grind the nails.  Dogs with ears that drop are prone to ear infections, so keeping the ears cleaned and dry is a must.

Before bathing, we recommend you take care of all other grooming tasks.  To protect the ears during the bath, place a small cotton ball in each ear.

To be thoroughly complete, the grooming tool box of a Cavalier King Charles Spaniel owner should include a variety of items.

Clipper with a number 10 blade,

Nail clippers or dremel and some styptic powder

Even though the list above seems like a lot of equipment, it will pay for itself within the first year if you choose not to get your dog groomed professionally.

The firm bristled brush is great for the daily brush out as long as there are no mats.  If mats are present, use the slicker brush or side of the steel comb, combing gently to de-tangle and separate the mat.

A good quality ear cleaner preferably one prescribed by your veterinarian is used weekly to clean the ears. My favorite is mentioned below.

I originally purchased from my vet but then found it online and was able to save a little money.

Place a few drops in the ear, massage, and then clean out with the cotton balls.  Use eye wipes or solution daily to remove any debris and tears around the eyes.

The clipper and Number 10 blade is used to shave a small area around the anus, groin and partially down the inside of the back legs.  Called a sanitary clip, this keeps the dog cleaner between baths.

The clippers can also be used to remove hair between the foot pads or if the dog will not tolerate this, use the shears to carefully remove any hair between the pads that grows longer than the actual pad.

Once these tasks have been completed, you can bathe the dog with protein shampoo and finish with a conditioning rinse.  Use a hair dryer and brush to achieve the smoothest finish.

Finally, use the slicker brush for the final brush out.  If the dog has some stray hairs, use the shears to trim them off.  Whiskers can be trimmed if desired.

The Cavalier King Charles Spaniel is a relatively healthy breed but there are some diseases that tend to occur in the breed.  The parent club has worked hard to educate breeders on the various genetic tests that can be done on the parents to assure healthy puppies.

Please do not get frightened by the list as it is highly likely that your puppy will never suffer from any of these conditions. 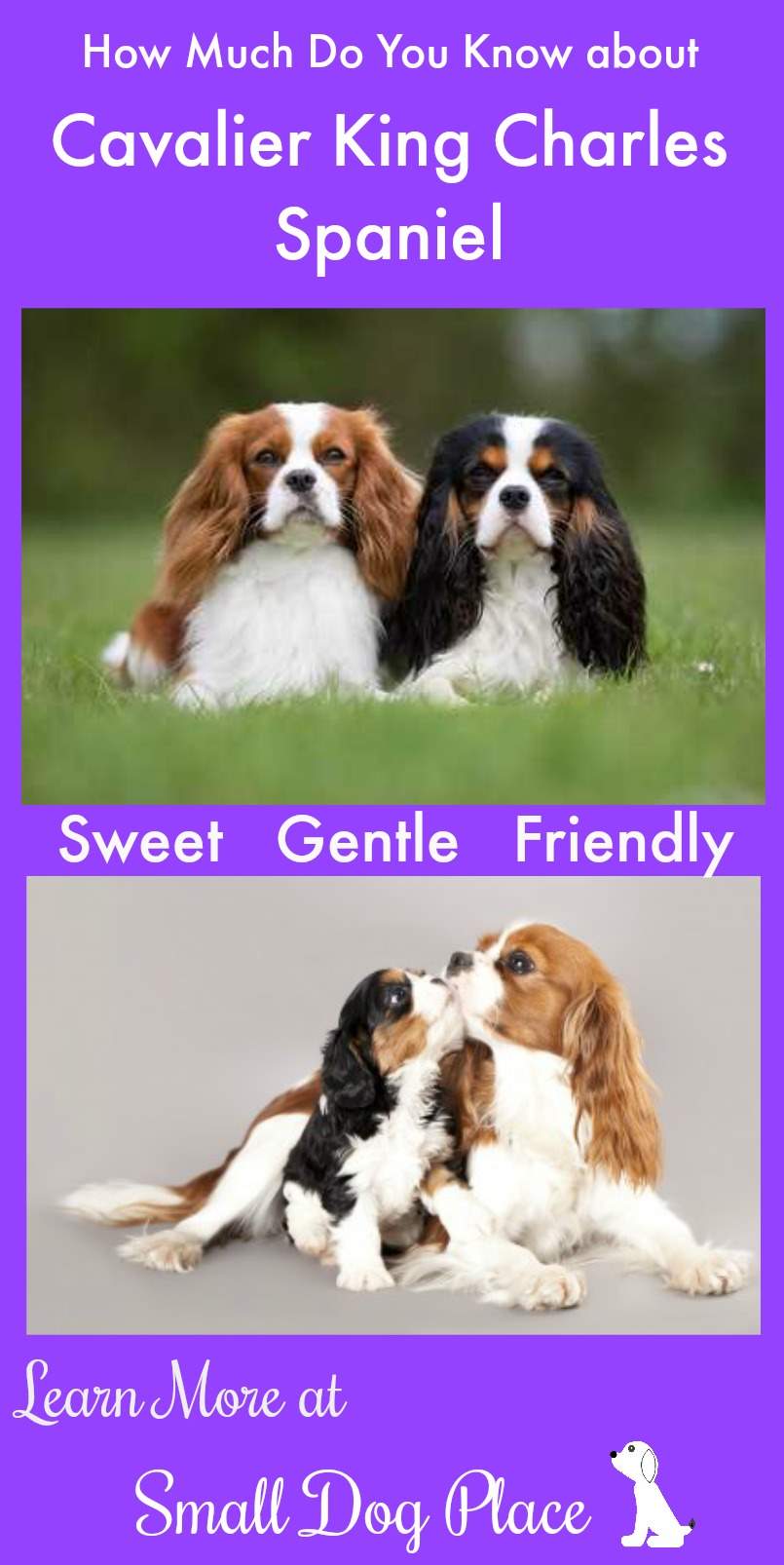