The Coton de Tulear (pronounced coTAWN day two-LEE are) is a rare and ancient breed, originating in Madagascar.

Anyone looking for a small, white fluffy dog, this has to be the breed for you.  They get their name from their fluffy cotton like hair and the city from which they were thought to originate--Tulear, a port city in SW Madagascar. 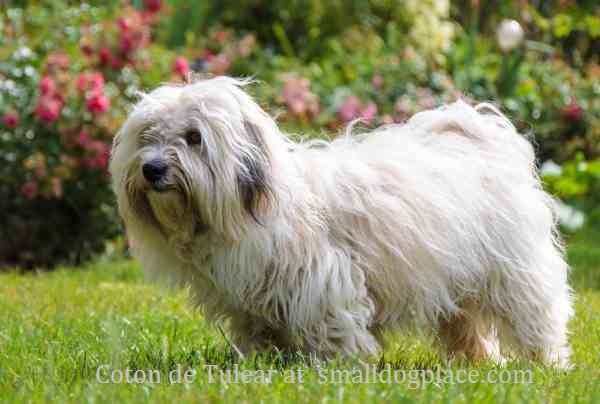 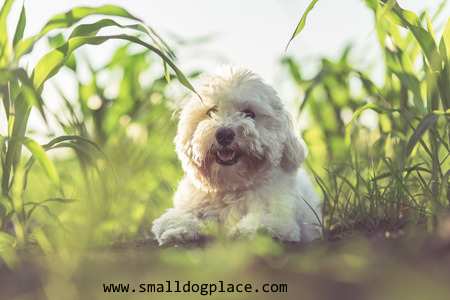 Today Tulear is known as the port city of  “Toliara”,  Some describe them as a miniature Old English Sheepdog and others think of them as cute stuffed animals.

Neither description depicts the true nature of these puppy-like companion dogs.  They are intelligent, eager to please, easily trained and highly devoted to their owners.

They do well with children and get along fine with other dogs and cats.  In fact, they can adjust to just about any type of life style and maybe the ultimate “anti-stress dog.”

Most people think of the Coton as purely white, but they can come in three different color variations:  White, White and Black, and Tri-color.  The tri-color is mostly white with some champangne patches and a faint dusting of black hair.  Many puppies are born with darker hair that eventually lightens.

The most prominent features of this breed are their cottony coat, dark nose, expressive eyes, short legs and a tail that curls over the back of the body.

Still rare in the USA, the standard for this breed was first established in 1969 and recognized by the FCI, Fédération Cynologique Internationale in 1971.

The First Cotons were brought to North America in 1974.  Since the early 1990s, they have been gaining popularity in both the US and Canada.

In the US, there is some controversy and several breed clubs have been formed each with a different standard.  In 1996 the American Kennel Club recognized the breed and placed it in their Foundation Stock Services in the Miscellaneous Group.

Other Names Used“Royal dog of Madagascar”

Good with other pets: Yes 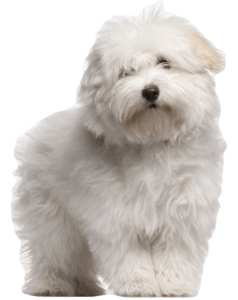 The Coton de Tulear originated on the island of Madagascar approximately 300 years ago.  They were favorites of the Malagsy Kings and noblemen for centuries and nobility were the only people permitted to own them.

The Coton was a favorite of the Malagasy Kings and noblemen and for many years only royalty could own them.

Legend has it that the Coton’s arrival in Madagascar coincided with a ship wreck in the proximity of Madagascar. The name or nationality of the ship is not known, but it has been assumed that the ancestors of the Coton breed were aboard that ship.

This infamous ship might well have been a pirate ship as Madagascar was a haven for pirates, and pirate graveyards can still be seen there.  The modern day Maltese, Bichon Frise, Havanese as well as the Coton de Tulear is thought to have descended from these ancient seafaring dogs.

Since this breed has very little prey drive, and is not a hunting dog, it is mostly likely been a companion dog since its origins.

If you like fable, here is another
version of the origins of the
Coton de Tulear

Here is story from Madagascar about Cotons who wanted to cross a river infested with crocodiles: There were a number of large reptiles with wide open mouths waiting patiently for a feast near a river.

Since swimming across was sheer suicide, our dogs needed a diversion to reach the opposite bank, and that is exactly what they did. The dogs looked first for the narrowest passage and left some of the pack there.

Then some ran to the widest part of the river and started barking ferociously on the bank. The racket lured all the crocodiles to that spot where they got out of the water and slowly made their way to where they heard the barking dogs.

Our sly dogs sprinted back to the narrowest passage, jumped in the water and swam across! 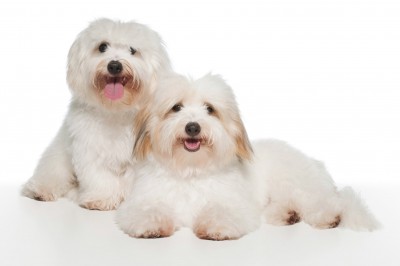 Bred only for companionship throughout the centuries, these dogs are alert, happy, lively and slow to anger.

Cotons are not big into barking, but they can act as a watchdog alerting you when someone is at your door.  Their sweet temperament, cute appearance and clownish antics charm anyone who has the opportunity to own one of these dogs.

Even with their soft endearing appearance, they are still very hardy dogs, equally happy in the snow, rain or mud and everything in between.

They love to play, romp around the yard and snuggle close to you whether it is on your lap or keeping your feet warm as you sit.

They are very devoted to their family and enjoy other pets as well as children.  They tend to get very attached to their person or family.

They are comical and will keep you entertained whether it is standing on their back legs, dancing or walking around like this or cocking their head when spoken to.  It is even said that they have a large vocabulary of sighs, whimpers, rumbles and other canine words to help their owners know just what they want.

They are intelligent and easy to train.  They do well in obedience, agility, tracking and even musical freestyle.

Housebreaking is not as easy with this breed.  Firm, consistent, gentle training works well with these dogs.  Early training is best because they are likely to think they are the boss and will be harder to train as they age. 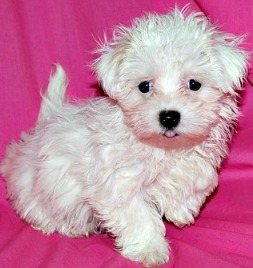 The Coton’s coat is long, soft, and dense and feels like cotton.  They need a good brushing once or twice a week to keep their coat from matting. Daily brushing is preferable.

They do not shed, but loose hair especially when brushed just like with human hair.  They are a low dander breed making them especially good for those with allergies.

Many puppies are born with black or brown markings on their faces and bodies. In most cases, these markings fade to a grey or light-brown color by about the age of two years. Occasionally, black or brown patches remain quite dark.

For the show ring, the coat is left long with the exception of a little trimming around the paws and the pads of the feet. Adult dogs require a deep brushing once or twice weekly to maintain a long coat.  Some people prefer to brush daily.  These coats should be misted with conditioner before brushing.

Combing or brushing a dry coat will cause breakage.  This is especially important during the time when the puppy’s coat transforms into the adult coat approximately 8 to 12 months of age.  At this stage, the puppy will lose their undercoat and matting happens quickly.

Many pet owners prefer to have their companions trimmed in a puppy cut that tends to accentuate their already cute appearance.  Coton de Tulears should be bathed about every couple of weeks and then dried with a blow dryer while brushing.  Mats can be pulled apart with your fingers or by using the end tooth of a metal comb.    The coat should not be allowed to dry naturally as this will cause matting.

The Coton du Tulear breed is healthy, vigorous, and long-lived with an average life expectancy of about 16 years. Compared to some breeds, they are exceptionally healthy.  According to the Coton de Tulear Club of America, the North American population of Cotons has no known genetic defects.

There have been some recent diseases that have occurred in individual dogs, but whether they have a genetic component is yet to be determined in this breed.

These identified disorders include

A condition that affects young puppies neurologically, leaving them unable to walk due to a lack of coordination of movements.

A cause of blindness which results from the progressive loss of tissue of the retina.  It is caused by a de-generation and loss of retinal tissue.

A dislocation of the kneecap or stifle, causing the knee to slip in and out of the socket as the dog walks or runs.

Dysplasia  both Hip and Elbow dysplasia