Our Red Dog Names list maybe the perfect solution to finding a great name for that flaming hot red puppy you just adopted.

But what is the best name for your pooch?

Even though all of these names have one thing in common (they mean red), many of them create mental images that help define the dog. 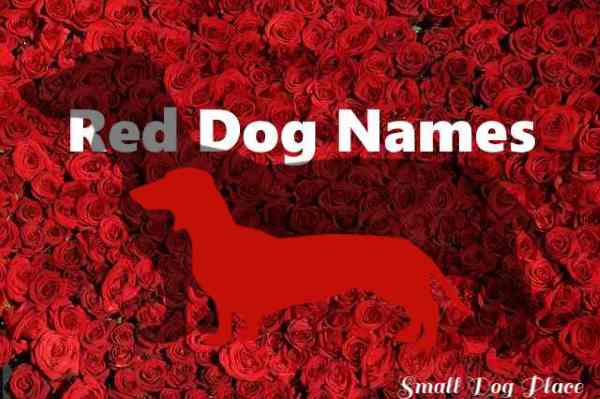 We adopted a little red and white dog recently and wanted the perfect red dog name for him.

So we began to brainstorm and came up with names like Carrot Top, Cayenne and Curry.

They all would have described his color just fine, but they didn’t seem to address his temperament or personal quirks that made him who he is.

We needed to search farther.

Here was a good little puppy who always seemed to be getting into trouble.  Drama followed him everywhere, but in the end, everything seemed to resolve itself and all was good.

Finally it dawned on me that he was like one of my favorite children’s book characters.  He was a Clifford (from the book series written by Norman Bridwell.)

But at two pounds and not likely to get heavier than eight pounds, he just didn’t look the part of a canine that needed a tractor trailer to transport him to the vet.  Then, the weirdest thing happened.

Help Comes From Unusual Sources When Naming a Dog

We got a packaged delivered to our home through the US Postal Service.  Postal Workers usually hate to come to my home because we have so many dogs, but this one came knocking and out ran this little 2 pound dog.

The postal worker asked me for his name, and I hated to admit that he didn’t have a name yet.

But Mr. No-name puppy showered this guy with kisses and jumped excitedly to play.

I commented that the puppy really seemed to take to this man.

Pleased with himself, he nonchalantly suggested that he be called Cliff or Clifford from the old TV series Cheers.

The screen name for the postal worker on Cheers was “Cliff.”

That did it!  His name will be Clifford, the Little Red Dog! 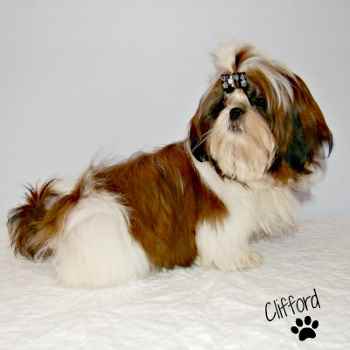 This list includes color names, objects, both natural and manufactured that are red, as well as characters from cartoons, movies, books, and television shows.

Why do people name their little dogs after a male or female human name?  This is easy.

Most people who own small breed dogs choose them because their size and their resemblance to a human baby.  Some even choose to be a dog parent rather than a human parent.  Whatever the reason, this list of names are based on human names.

If you love the idea of using a human name for your little girl, you are in luck.  You can highlight your girl's lovely red locks and still choose a dog name that is also popular with human parents.

Blaze (Good for a girl or a boy)

Ellie (a girls' name and the animated character from Disney movie, Up)

Hazel (a girl's name from the old English means reddish-brown)

Lucy (as in Lucille Ball, the redheaded actress)

Rosie (If Rose is too formal, why not Rosie?)

Ruby (A human female name and also a Precious metal)

Finding a name for that handsome fellow of yours is not difficult if you also want to feature his beautiful colors. Here are a few to get your creative juices flowing.

Archie from the drama series Riverdale.  He has red had and would surely lend his name to your red dog.

Elmo (and the Red monster on Sesame Street)

Eric (a boys name, Eric the Red, and the Prince in Little Mermaid)

Harry (Prince Harry, son of Charles and Diana. He has red hair)

Rowan (a boy's name from the Gaelic meaning red)

Rudolph (ok, so Rudolph was really a red-nosed reindeer)

Jeanie Mitchell from Marysville, Ohio
made these great suggestions:

I love Red Skelton but I think a lot of people would think you named your dog "skeleton".

So why not use some of his characters instead. Clem for Clem Kadiddlehopper or Freddie the Freeloader.

Breda is a city in the Netherlands that holds an international festival for redheads.

The Word, Red in Other Languages

There is a name in every language on earth for the color red, but I have only listed the ones that are short and easy to pronounce for an English speaking puppy parent.  Please contact me if you think of more.

Aka (Japanese for Red)

Rouge (French for red, in Hungarian, lipstick) ADDED By Julia from the United Kingdom

These terms whether from a literary sense, medical term or the everyday vernacular all mean the color red or various shades of red.

Auburn (Auburn is usually associated with hair color in people.  If you hear the term auburn hair, you immediately think a deep reddish brown color.)

Cherry (Cherries are always associated with the color red, some varieties are darker than others)

Ruby (Ruby is a precious gem but it is also a color name used to describe red in a more poetic way.)

Blush (Some people blush more readily than others but it all refers to the reddening of the face). Some cosmetics also use the term to mean the addition of a slight red coloration especially to the cheeks.

Ruddy (Normally used to describe the skin color or complexion of a person, the word means reddish or the color red.)

Claret (the color name of a deep red with purplish tones, similar to maroon or burgundy)

Poppy (the poppy flower is red)

Fuchsia (a two-tone colored perennial usually red and purple.  It would make a great girl's name)

Here are a few more great names you could you if want to bring out the color of your dog's hair.  Use Copper if you have a brownish red dog.  Crimson, Rusty, and Sienna are more color words you could consider.  Scarlet comes from old French meaning red and was the name used in Gone with the Wind for Scarlet O'Hara. 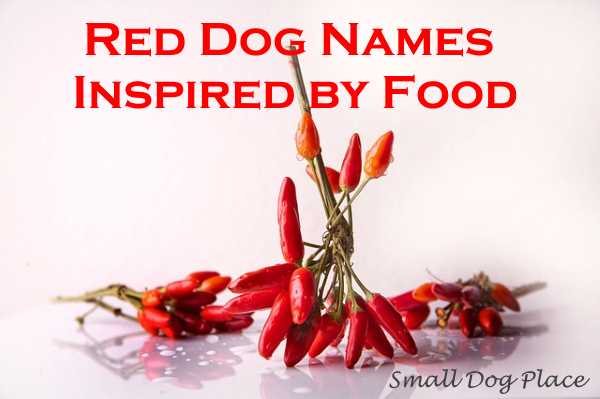 Food names make great dog names.  I've divided this list into two parts, drinks and foods for easy reading.  Many of the names on this list are a shade of red rather than the primary color red. Here are a few red foods that may make a good dog name.

Beets (Well, maybe a little on the purple side)

Jelly Bean (Well, some are red)

Lobster (For that little crustacean your life)

Pepper (as in red pepper)

Peppermint (Candy, Peppermint Pattie was a redhead in the cartoon, Peanuts)

Check out our other great dog names based on foods.

Here are some red dog names that were inspired by drinks.  For a more complete list of dog names based on drinks, you'll want to check out that page.

Red Dog Names Inspired by Objects that are Red

To spur the imagination even further, we look at objects in our environment that are normally red. Think Bricks, Hydrant and my favorite, Solo cups.  Solo would be a great name for a red dog, especially if you do not plan on having other dogs in the household. 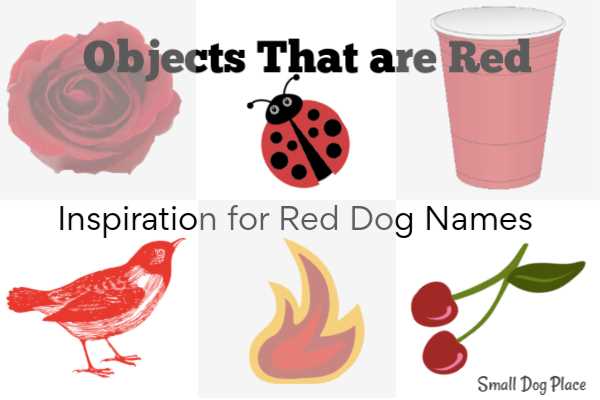 Autumn (reminiscent of the color of the season)

Brick (Traditional color of bricks made  with clay Is red)

Flame (Good as either a boy or a girl name)

Flamingo (A large pink bird. Have a pink dog?)

Foxy (Some Foxes are red)

Panda (as in the Red Panda)

Pansy (Flower that comes in  a variety of colors including red)

Poppy - Mentioned elsewhere on this page;  red-orange in color

Wilma (from the Flintstones) 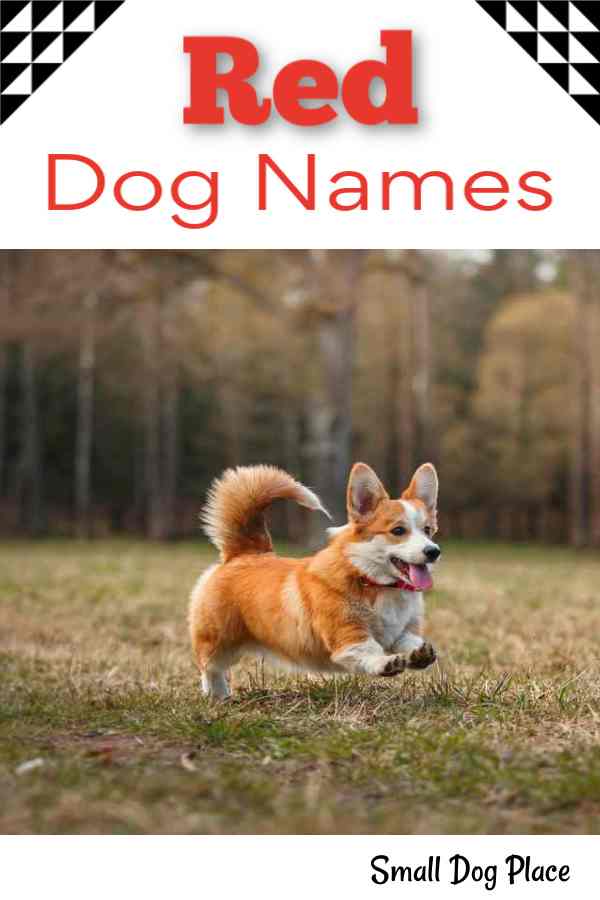 Correction:  Amanda from Spokane, WA, USA, wrote,
"Garnet is a precious gemstone not metal. It is dark red in color typically and is the birthstone for January."

Brook from the U.S.A recommends the name, Copper for a Penny colored dog.

Ann, From MA. U.S.A. writes:
Sedona for its red rocks.  Could be a great name for a red female dog

Darren from Victoria, Australia suggested the name,
"Carmine."   The names means a vivid crimson color and you get it when you burn Lithium Chloride.

Any Chemists out there??

Pamela from Oregon, USA writes:
Dhargan - which is Gaelic and means " red stain"

Elizabeth Boyer from Essex, UK writes:
"When I went to school Ruby was a precious stone not metal.  We are going to name our Fox red Labrador "Rosie" I loved many of your suggestions."
Thanks Elizabeth

Got a few Great Red Dog Names to Add to the List?

Use the form below and give us your suggestions.  Please indicate that you want your suggestion placed on the red dog names page and be sure to tell us why it would be a great name.