Who could imagine that there were so many famous dog names?  We found these names from a variety of sources:

There is a lot of overlap among these categories. For example, a children's book is made into a movie then altered to create a television series.   When the name falls into more than one category, I only list it once.

Take a peek at the list of Famous Dog Names and don't forget to let us know if you can think of one that we forgot.

Famous Dog Names from the Movies

Balto:  A wolf-hybrid that starred in the 1995 movie by the same name.

Beethoven:  An adopted puppy that grows into a large St. Bernard.  In the 1992 film by the same name.

Bella: the dog in the book and movie, A Dog's Way Home

Benji:  A stray dog played by Higgins saves 2 children from being kidnapped in the 1974 film by the same name.

Bingo:  A runaway circus dog in the 1991 movie by the same name.

Bolt:  a white shepherd in the computer animated 2008 movie by the same name

Bombón: in the Argentine-Spanish 2004 movie, "El Perro and Bombón: The Dog."

Bruiser:  The chihuahua in the 2001 comedy movie, "Legally Blond."

Chance: The American Bulldog in the 1993 movie, "Homeward Bound," a remake of the 1963 movie, "Incredible Journey."

Chiffon:  The Old English Sheepdog, in the 1959 black and white movie, "The Shaggy Dog."

Cooper:  The Border Collie and family dog in the Movie, Angel Dog

Cujo:  A rabid St. Bernard traps a woman and her son at a deserted farm in the 1983 thriller.

Einstein:  (Also known as Einie) was Doc Brown’s dog, in the "Back to the Future" movies.  It is uncertain what type of breed it was—some say mixed breed, others say a type of sheepdog, Briard, or Berger Picard.

Frank the Pug: The fast talking Pug-like alien in the 1997 science fiction comedy, "Men in Black."

Hercules:  An English Mastiff in the movie, "Hercules Saves Christmas," a 2012 children’s movie.

Hooch:  A junkyard dog (French Mastiff) who witnessed a murder in the 1989 movie, "Turner and Hooch."

Kiki: the German Shepherd in the 1989 martial arts film, "Kickboxer."

Lassie:  No need to introduce Lassie, other than to say that he/she was a rough-coated collie.

Marley:  A yellow Labrador Retriever, from the 2008 movie, "Marley and Me."

Mike:  the border Collie in the 1986 American Comedy, "Down and Out in Beverly Hills."

Moses:  The Chihuahua in the 2004 American comedy, "Meet The Fockers."

Old Yeller:  The sad 1957 Disney movie about Old Yeller who becomes infected with rabies and has to be shot by his owner.  He was played by a Black Mouth Cur dog.

Otis:  The pug from the movie, "The Adventures of Milo and Otis."

Red:  in the movie by the same name

Sadie:  The border collie in the movie, "The Conjuring."

Shadow:  The Golden Retriever in the movie, "Homeward Bound."

Shiloh:  the beagle in the 1996 children’s movie by the same name

Slink:  The dachshund in "Toy Story"

Sounder:  A dog owned by a sharecropper in post depression Louisiana.  In the 1972 movie by the same name.

Thor:  The German Shepherd Dog in the movie, "Bad Moon."

Toby: Then named Bailey, then Ellie, then Bear, and finally Buddy, from the book and movie, A Dog's Purpose

Toto:  A cairn Terrier in the movie, "The Wizard of Oz."

Uggie:  From the movie, "The Artist."

Underdog:  The beagle in the movie by the same name.

Verdell:  A brussels griffon in the movie, "As Good as it Gets."

Winn-Dixie:  in the movie, "Because of Winn Dixie."

Bandit:  the Bulldog from the TV series, Little House on the Prairie.

Baskerville the Hound:  from the puppet TV series, the Muppets

Brian: the family dog from the Television series, Family Guy

Buster:  the Beagle in the TV series, the Wonder Years

Comet:  The families' Golden Retriever in the series, Full House.

Cosmo: the Spacedog character (and telepathic Soviet dog) in the animated TV series, Guardians of the Galaxy

Doc:  a mixed breed from the series, Gray's Anatomy

Flash:  a Basset Hound from the TV series  The Dukes of Hazzard

Astro: the Great Dane, in the cartoon The Jetsons.

Bitsy: the family dog in the comic strip, Marvin

Blue: the cartoon dog in the  children’s show Blue’s Clues.

Bolivar:  the St. Bernard in the animated movies and comic strip, Donald Duck

Daisy:  the family dog in the comic strip, Blondie (also a movie)

Dawg:  the family dog in the comic strip, Hi and Lois

Dogbert: the cartoon dog in the Dilbert comics

Farley: the family dog in the comic strip, For Better or Worse

Marmaduke: the Great Dane in the comic strip by the same name.

Sandy: the Airedale Terrier in the Little Orphan Annie's comics

Santa’s Little Helper: the pet dog of the Simpson Family, in the animated series, The Simpsons.

Snoopy: the beagle of the Peanuts comic strip, TV and movies

I have supplied a link from each of these Famous Dog Names to Amazon if you would like to check out prices.

Spot from the Dick and Jane Series

Rigsby from Henry and Rigsby

Milo from the children's book Maggi and Milo by Juli Brenning

Flash from the book, Bad Dog Flash by Ruth Paul

Spot, from the Spot Series by Eric Hill

Blue from the Blue's Clues Series

Wishbone from the book, Wish by Barbara O'Connor

Winn-Dixie, from Because of Winn Dixie by Kate DiCamillo

Biscuit from the series by Alyssa Satin Capucilli

Searchlight from the book Stone Fox by John Reynolds Gardiner

Shiloh (the beagle with the same name by Phyllis Reynolds Naylor

Apollo:  The first search and rescue dog along with his handler, Peter Davis to arrive to the South Tower of the World Trade Center

Bud Nelson: Alongside his human Horatio Nelson Jackson, Bud Nelson became the first dog to cross the United States in an automobile in 1903.

Buddy:  a German Shepherd, the first seeing eye dog in 1929.

Chaser:  John W. Pilley's Border Collie known as the smartest dog in the world, featured in the book Chaser: Unlocking the Genius of the Dog Who Knows a Thousand Words.

Chips:  a trained sentry dog and the most decorated dog of World War II.

Lucca: a German Shepherd and Belgian Malinois mix that was trained to detect explosives.  In the Marines, she was sent twice to Iraq and once to Afghanistan.

Nemo:  The sentry German Shepherd and hero of the Vietnam War

Pal:  The real life dog behind the Lassie movies and TV shows

Rin Tin Tin: a German Shepherd that was rescued on a French battlefield during World War I later became a movie star.

Sallie:  the mascot of the 11th Pennsylvania Infantry during the American Civil War.

Sinbad the Sailor:  Served in the U.S. Coast Guard during World War II.

Terry:  The first and real Toto dog in the Wizard of Oz 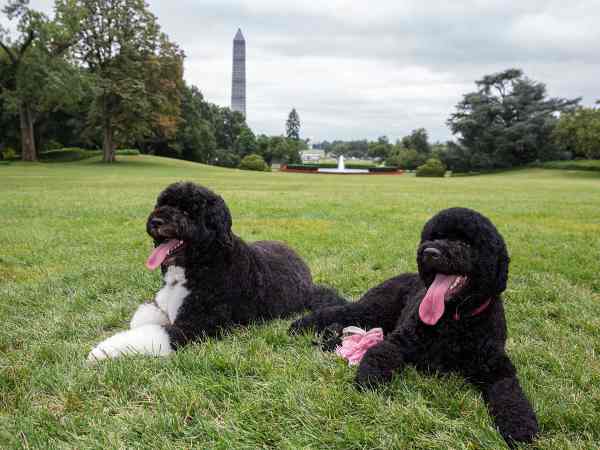 Charlie:  the Welsh Terrier of John F. Kennedy who sat in his lap as he decided what to do during the Cuban Missile Crisis.

Him and Her:  Beagles owned by Lyndon B. Johnson

Spot:  an English Springer Spaniel and one of Millie's puppies owned by George W. Bush

Yuki:  a mutt owned by Lyndon B. Johnson

Know of More Famous Dog Names That are Not on This List?