Exploring nautical pet names is not only fun, it can be educational.  Names on this list are perfect for those who love the water, sun and surf, enjoy fishing or boating, or maybe you are a Cruise Line enthusiast.

All the names on this page pertain to water, oceans, other bodies of water, fish and marine life, people who make a living on the sea, and of course, dog names with a distinctive nautical theme.

There are countless terms that refer to these topics, but we have narrowed them down to list only those that would make a great dog name.

From Our Small Dog Place Fans:

Benoit - Benoit LeComte swam across the Atlantic Ocean in 1998 and swam from Japan to Hawaii.

Brizo - Greek goddess of sailors. Brendan - the Irish monk, St. Brendan, is one of the patron saints of sailors.

Elmo and his alternate name, Erasmus. 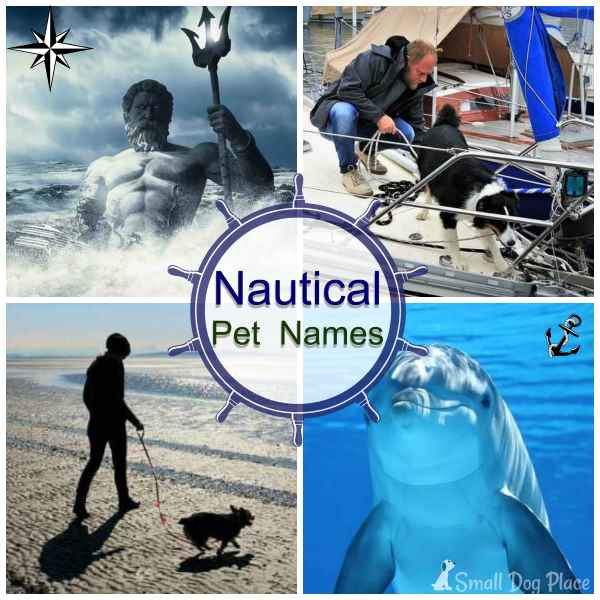 One and two syllable dog names are the best and easiest, however we have added a couple clever dog names that have 3 syllables.  You be the judge.

Nautical Pet Names A- B

Ahoy - A nautical term used to call out to someone

Anchor - A heavy object to keep a boat from drifting

Astern - Towards the  back of the ship (Stern)

Bait - Small food used at the end of a fishing line

Baltic - as in the Baltic Sea

Baleen - A type of whale

Bass - A type of fish

Bay - A broad inlet of ocean where the land curves around it.

Beach - Land area by the sea

Bell - In nautical terms, a bell that is placed on a buoy.  [Belle is a very popular girl dog name]

Berth- A sleeping area on a boat

Canal -  Narrow man-made water passageway as in the Panama Canal

Captain - Someone who commands a ship

Cargo - Goods or merchandise carried on a ship

Convoy - A group of ships traveling together

Coral - Animals that make up a coral reef

Crew - People who work on a ship

Diver - Someone who goes deep in the water with scuba gear

Dory - A small shallow boat;  Also a character in the movie Nemo and more

Ensign - Lowest ranking commissioned officer in the US Navy

Ferry - A type of vessel that transports people and other items across bodies of water.

Fin - in the UK, this is the structure on the topside of a submarine.  Finn is a very popular boy dog name

Fish - Type of animal living in water.  In nautical terms, it means to secure an anchor on the side of a ship

Frigate - A type of warship

Galley - The kitchen on a ship

Galleon - In the 16th to 18th centuries Europe, a multilevel sailing ship

Gunner - A person in the armed forces that operates a gun.  This is a popular boy dog name

Gill - A part of a fish used for breathing in water

Guppy - A small fish;  A good name for a small dog

Harbor -A natural or man-made body of water adjacent to the mainland.

Helm - The mechanism that steers the ship

Henry (Morgan) - Pirate;  You could use either Henry or Morgan as a great dog name

Hermit (Crab) - Type of crustacean;  a great name for an independent puppy.

Hudson - as in Hudson Bay;  A good name for a male dog

Hurricane - Severe storm;  Great choice for a puppy whose personality suggests chaos wherever he goes.

Jacques - as in Jacques Cousteau, a French naval officer, filmmaker, and researcher who studied the sea and sea life.  Both first and last names make good dog names especially for a french dog breed.

Jaws - Mouth of a shark and Movie by the same name.

Laker- A ship  that carries cargo on the Great Lakes; A great name for a mid-western USA puppy

Mackerel - A type of Fish

Manatee - A marine mammal that lives in the water

Mariner - Also known as a sailor

Marlin - A type of Fish

Master - in Nautical terms, a ship with a specified number of sails;  In dog terms, a good name for an alpha male or female.

Mate - Fellow seaman or friend;  Great name for either a boy or a girl puppy.

Moby (Dick) - Famous Whale and name of a book;  A great dog name for one that loves the water.

Motor - An engine that powers a boat

Pearl - A hard object found in the shell of an oyster;  A great country girl dog name for one that is cream colored,

Pirate - In nautical terms, a person who attacks and robs ships at sea:  Is your dog a great thief when it comes to stealing treats and hiding them?

Pilot - A helmsman or person who takes charge of a ship as it enters a narrow or finfined waterway such as the Panama Canal.

Pontoon - A flat bottom boat that relies on pontoons to float;  A great name for a dog that loves to sail

Poseidon - God of the Sea

Puddle - A small amount of water remaining on a hard surface.  What puppy wouldn't want the name puddles?

Puffer - As in Puffer Fish;  A great name for a small dog that thinks he is larger than he is.

Radar - A system for detecting the presence, direction, distance and speed of another craft;  Here's a name for a puppy that doesn't miss a thing.

Rudder - A flat object used to steer a ship

Sailor - Someone who works on a boat

Sandy - The land that is covered with sand and adjacent to the sea.  Sandy is a popular girl dog name for one that has a tan coat

Sardine - A type of Fish

Shrimp - A type of crustacean

Sinbad - a dog serving aboard the cutter USCGC Campbell in WWII,

Sinker - A weight added to a fishing line

Skipjack - A type of sailboat

Sonar - A system for detecting objects underwater;  A great dog name for an above-average watchdog.

Starboard - The right side of a ship when the ship is facing forward.

Titanic - An unlucky large ship that sunk in the north Atlantic:  A great name for a large dog or a small dog that thinks he's a big dog

Torpedo - An underwater missile fired from a ship, submarine or aircraft;  A great dog name choice for a very fast puppy

Vessel - A ship or large boat

Diane Brennan from the United States

Did We Forget a Great Nautical Pet Name

We've tried hard to research great nautical pet names, but admit, there are probably many more that we missed.  Want to help?

If you think you have another great name to add to this list, please submit it below.  We will add it the next time we update the page with your name and location, so that you get all the credit.