Brachycephalic Syndrome:
Is Your Dog at Risk? 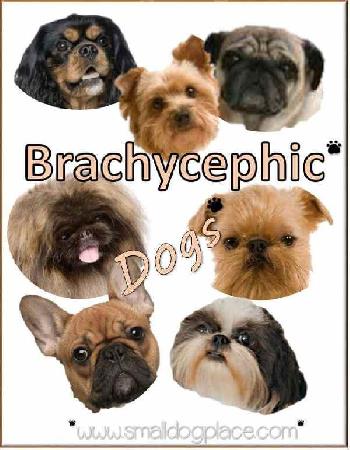 The term, brachycephalic syndrome in dogs, is not a disease per se, but a set of characteristics that can cause breathing problems that range from slight to severe and life-threatening. But who is affected?  Any dog with a short nose is considered to be a brachycephalic dog.

Brachycephalic dog breeds have a shorter snout that causes the dog’s airway to be short. Some have such short noses as to have little or no muzzle at all.

There are quite a few small dogs that considered to be brachycephalic.  Some have shorter snouts than others.

Four separate anatomical anomalies contribute to the syndrome and a brachycephalic dog may be affected by one or more of these abnormalities.

Elongated Soft Palate:  The soft palate is the soft portion of the dog’s mouth.  In brachycephalic dogs, this part is too long for the length of their smaller mouthes.  The excessive amount of soft palate can partially block the entrance to the trachea (wind pipe) at the back of the their throat.

Stenotic Nares:  Dogs with stenotic nares have abnormally This refers to dogs with narrow or small nostrils.  This smaller opening restricts the amount of air that can go in and out of the nostrils. Some puppies born with small nares grow out of it with age.

Hypoplastic Trachea:  A hypoplastic trachea has a smaller diameter than normal trachea.

Everted Laryngeal Saccules:  These are small sacs or pouches that are located inside the larynx or voice box.  If these pouches turn outward or evert, they will further obstruct the flow of air.

If one or more of these abnormalities are present, it requires more effort to inhale.  Many times these dogs will end up breathing through their mouth rather than their nose.  As a general rule, the more abnormalities present, the worse the symptoms become.

Dogs with fewer problems might have noisy breathing, snort when excited and may snore when they sleep.  Those that are more severely affected with show more noise when breathing, tire easily after exercise and may even collapse or faint.

Other symptoms can include coughing, gagging, retching and vomiting.  Hot humid weather brings out the worse symptoms in these dogs. Heat stroke is a major possibility in brachycephalic syndrome dogs who cannot escape the heat.  Obesity seems to worsen the symptoms.

As the dog ages, the increased effort to breathe causes strain on the heart.  Dogs with many different problems show symptoms early in life.

Selective breeding for these cute little noses has resulted in many of these respiratory difficulties.  Many of the breed standards specify that their snout be short.  People often find these little noses irresistible, so breeders will continually breed for smaller and smaller noses.

But not all brachycephalic dogs have severe problems.  One of the biggest problems that these dogs face is overheating, because when dogs overheat they pant to cool off and their panting can lead to swelling and narrowing of an already constricted airway.

Even gastrointestinal problems can occur because these little dogs are working so hard at breathing, they may swallow too much air.

Problems that are present at birth make it difficult to nurse.  Most of these severely affected puppies do not survive.

Other severely affected puppies show symptoms when they they are just learning to swallow food and breathe at the same time. Sadly, there is little that can be done to help these pups and most die shortly after trying to eat on their own.

If the dog is showing more symptoms, the veterinarian may prescribe Corticosteroids, non-steroidal anti-inflammatory medications and oxygen therapy.  These are all short term solutions that will relieve stress and assist with air flow.

Since the symptoms are due to anatomical abnormalities, the only way to correct them is through surgery.

Surgery is the treatment of choice when the dog is having difficulty breathing.

If stenotic nares are the cause of the difficulty, a veterinarian can remove a small amount of tissue from the nostrils, thereby widening the opening and allowing more air to pass through.

If it has been determined that an elongated soft palate is the major culprit of the problem, vets can surgically shorten it to a more appropriate length.

The everted laryngeal saccules can be removed to reduce the blockade in the larynx. The prognosis is usually good especially if surgery is done at a young age.

Other Problems Associated with Brachycephalic Syndrome

Respiratory problems are the most obvious life threatening symptoms, but the dog’s anatomy poses other problems, especially with their eyes and skin.

As the skull gets shorter and flatter, there is more skin covering the bones.  This skin ends up in tiny folds especially on the front of the face.

Folds produce crevices which creates the perfect warm, moist environment where bacteria and yeasts can thrive.

Sometimes this can lead to infection and inflammation.  Dogs with light colored hair often have severe face and eye stains due to the yeast and bacteria.

Antibiotics may help a little and daily cleaning and drying will reduce the symptoms but not cure the underlying problem.

Besides breathing difficulties and skin conditions, many of these brachycephalic dogs have eyes that protrude due to their skull structure.

The flattening of the skull causes the eye sockets to become shallow.  The result is bulging eyes can result in a greater likelihood that eye injuries will occur because the eye is more exposed.

Dry eyes, corneal ulcers and even direct trauma occur when a dog has such bulging eyes.

It is not uncommon for these breeds to lose an entire eye due to rough playtime or sudden trauma to the dog’s neck or head.

Eyes pop out of their sockets, and you have a medical emergency on your hand!

Sometimes a veterinarian can manipulate the eye back into its socket, but not always.  Surgery to remove the eye is the only course of action to relieve the pain.

All dogs have the same number of teeth, but when the head is smaller, there is less room for the teeth.  They can be prone to dental problems.  Some dogs end up with tongues that are too big for their mouth.

There is an additional risk for anesthetizing brachycephalic dogs.  Most vets recommend pre-op blood work. If you can avoid unnecessary surgeries, your dog will thank you.

Flying with these snub nose breeds can be dangerous.  According to PetFlight.com, From May 2005 through February 2015, 102 of the 210 dogs that have died during air travel have been brachycephalic dogs.

If these dogs must fly, it's best to heed the advice of airlines which require dogs, especially those who are shipped as baggage or in the pressurized cargo areas, to be kenneled in larger crates that have ventilation on all four sides.

Each airline has specific requirements.

For example, Delta will not accept Brachycelphalic syndrome dogs and cats as check baggage or as air cargo if the temperature on any part of the trip exceeds 70 degrees F.

You can cure brachycephalic syndrome but you can protect your dog from undue stress.  Here are a few suggestions.